Adapted from Joy of Baking

Peppermint Bark is something I always look forward to during the Holidays. I never made it myself, because it was the Christmas specialty of one of my wife’s coworkers and it seemed like trespassing to make it. Jan has different job now, so this year we decided to have a go at it. My goal was to make peppermint chocolate bark, not peppermint and chocolate. 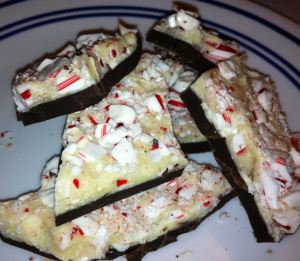 I knew that I wanted to make two layered bark, because that is what Jan prefers. But for a seemingly simple recipe (melt chocolate, sprinkle on peppermint chunks), I did find variations and techniques on the internet that I decided to include. Stephanie Jaworski’s blog (Joy of Baking) includes a good video of the process of making two layered peppermint bark.

To Stephanie’s basic recipe I decided to add peppermint extract to the dark layer of chocolate (something that several other recipes I had seen included).  Many recipes, including Stephanie’s, also included a little oil to give you more time to spread the chocolate out before it sets up. This extra oil is also supposed to give the chocolate an attractive shine.  From Martha Stewart I took the idea of mixing some of the crushed peppermint into the white layer, instead of just sprinkling it on top. This makes the white layer slightly thicker than the dark and also makes a pretty speckled band at the edges.

1. Line the bottom and sides of a 9 x 13 inch baking pan with aluminum foil, smoothing out any wrinkles. Stephanie’s technique is to press the foil over the outside of the pan to get close to the correct shape before putting it in the pan. This makes it much easier to smooth out the foil on the inside without wrinkles.

2. Melt the dark chocolate with 1 teaspoon of oil and the mint extract in a heatproof bowl placed over a saucepan of water at a low simmer. Stir with a Teflon spatula until all of the lumps of chocolate are completely melted. It is hard to handle the bowl easily with an oven mitt, so I recommend using a low temperature. While a higher temperature might melt the chocolate faster, a low simmer will prevent the edge of the bowl from becoming too hot to handle.  You will need to steady the bowl while you are stirring the chocolate. If you hold the edge of the bowl tightly to the side of the sauce pan the steam will escape some where your hand is not. Burns, not recommended!

3. When you take the bowl away from the saucepan, have a kitchen towel ready to wipe away the condensation from the bottom of the bowl or it will drip onto your baking pan.

5. After the bottom of the pan is completely covered, shake and tap the pan on the counter to make an even layer.

6. Place the pan in the refrigerator for about 30 minutes, or until the chocolate has set.

7. While the first layer is chilling, break up the candy canes.  Place them in two plastic bags (one inside the other). I found a meat tenderizer (a small hammer with a jagged face) worked very well for this, but you could use a rolling pin or a heavy spoon.

8. Wash and dry the bowl and spatula, so they are ready for the next step.

9. Melt the white chocolate with the remaining 1 teaspoon of vegetable oil in a heatproof bowl placed over a saucepan of simmering water.

10. When the chocolate is completely melted, add ½ cup of crushed candy canes and fold them into the chocolate.

11. Wipe the bottom of the bowl and immediately pour the melted white chocolate over the dark chocolate. Be careful when you are spreading this layer out, because the hot white chocolate will start to melt the dark layer and if you spread too vigorously you will get dark streaks in your white layer.

12. Shake and tap the pan, so the chocolate is in an even layer.

14. Place the pan in the refrigerator for about 30 minutes, or until the chocolate has set.

15. Remove the Peppermint Bark from the pan by lifting the edges of the aluminum foil. Peel away the foil and break, or cut, the bark into small irregular pieces.

16. Store in an airtight container in the refrigerator for up to two weeks.