This year I was unable to participate in the family holiday rum-ball spectacular.  I was in Italy, and also had the stomach flu.  That is indeed as unpleasant a combination as it sounds.

So now that I’m stateside and better, Christmas Eve I did some pickup cookie assembling. I popped on A Very Murray Christmas (which I love but my parents can’t stand) and made my own twist on Jan’s Christmas Rum Balls.  Only, I used bourbon and scotch whiskeys.  The base is the same, the boozy variations follow.

END_OF_DOCUMENT_TOKEN_TO_BE_REPLACED

I work. A lot.  I also cook a lot.  Mostly what results are various states of compromise between attention, quality, availability of ingredients, and sheer tiredness.  Occasionally though, 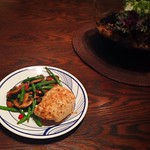 Chris or I produce great results, sometimes quite by accident.  I’m adding this as an occasional series on this blog, capturing particularly good gems from the weeknight cooking world.  We tend to cook soft, vegetable-heavy, and paleo/paleo adjacent meals in our house.

Our garlic went bad, but this was alright without.

Filed under Side Dishes, Weeknight

Baked chicken? Boring.  I ate a lot of baked chicken as a kid, and it was boring.  (Sorry dad). But stuffing baked chicken can be awesome.  It transforms a boring, bland and surprisingly tricky dish into a delicious and spiffy one.  This is the spirit behind the butcher counter pre-stuffed chicken: easy peasy elegance.  Except for the fact that every pre-stuffed chicken I’ve ever bought has suffered from vague cooking directions, watery chicken, and too much stuffing.  I’ve also screwed up a plethora of stuffed chicken recipes all on my own: over stuffing, over cooking, under cooking, simply falling apart. 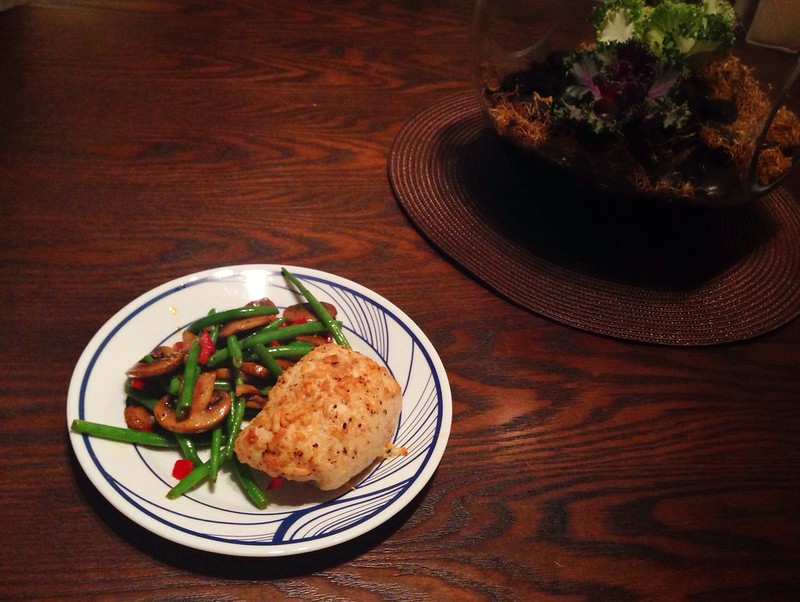 So tonight when I made an awesome stuffed chicken, it was a Eureka Moment. All of my past mistakes were made clear, resolved by serendipity and hindsight.  I had everything I needed, I treated the ingredients right, I listened to my gut when cooking, and I served right away.

END_OF_DOCUMENT_TOKEN_TO_BE_REPLACED

Many people associate cream of mushroom with Campbell’s-assisted casseroles.

I did not grow up with these, so got to discover them as an adult (along with butter and cream). But that handy concentrated glop, even diluted, is nothing like cream of mushroom from scratch. I even convinced Chris of this fact, with this recipe. It’s loosely adapted from 500 Greatest-Ever Vegetarian Recipes‘ wild mushroom soup.

END_OF_DOCUMENT_TOKEN_TO_BE_REPLACED

Dedicated to my mother, Claudia, the first great cook.

Myr has finally dragged me, kicking and screaming, to start posting my recipes on-line.

A bit of family history and cooking philosophy is perhaps in order so any gentle readers will understand where I am coming from.

My mother was a middle child in a large family.  As a result, the older sisters did all of the cooking and my mother never learned “family home cooking” in her mother’s style.  She liked to say that when she married my father she “could only boil an egg and make French Onion Soup.” Starting from scratch, as it were, she experimented with a variety of cuisines, frequently influenced by my father’s travels to Japan and Europe. Dad would return with tales of foods he had eaten and she would attempt to replicate the dishes with the ingredients available at the time (the 1950s to 1960s). At a time when most Americans were eating hot dogs, meatloaf and mashed potatoes, she served us Pizza , Chicken Teriyaki, and hot German Potato Salad (long before these became standard American foods).

My mother taught me her style of experimental cooking and I ran with it. When I was working in the North Sea, I paid attention to what the Spanish cooks were making for dinner.  The same was true when I traveled in Europe and when we lived in Chengdu and Hong Kong. I picked up cook books the way many people pick up novels.  It became a challenge to find cuisines I had not experimented with, but I was experienced enough now that I could rarely make any dish exactly as written.  I always had to tinker, particularly when my wife’s health required an extremely low fat diet.

What makes a dish a particular dish?

Five recipes might have the same name but have only a few main ingredients in common.  I learned to read and compare recipes and select the elements that I felt should make the dish.  I might take ingredients from some of the recipes and cooking techniques from the others and come up with something unique and my own. I realized recently that this is the same technique used by the “Cook’s Illustrated” staff in creating their recipes. (I am a faithful reader by the way, but I have serious issues with some of their base ecological and culinary assumptions.)  Sometimes this process would produce spectacular culinary disasters, but more often than not my dishes were successful.

Myr has convinced me to begin posting my journey on this blog from time to time.

We love the crawdads at Crawdaddy on King Street in San Jose, but at $10 a pound (unshelled) it gets very expensive to make a meal of them. Crawdaddy has 4 levels of heat: mild, medium, hot, and fire. We once got their hot and the only thing we have ever had that was hotter was real Thai soup. Their mild is spicy enough for most palettes. To stretch this special treat I use 2 pounds of crawdads as a soup base (which produces about ½ pound of meat) and comes with about 2 cups of their boil sauce which has lots of garlic. To boost the meat content I also add some langoustine and shrimp. The soup with Olive Oil Garlic Bread and Tomato and Cucumber Salad is this meal:

END_OF_DOCUMENT_TOKEN_TO_BE_REPLACED

When I’m not acting as food photographer, blog editor, and sous chef, I’m with my mom on the cocktails-and-desserts side of the house on Sunday nights.  This was a mildly disastrous cocktail I made to go with the Crawdaddy Chowder dinner. At first I used way too much lime, three or four times as much as it needed.  I think I got limes and oz of lime juice confused.  In any case, it required rescuing, above and beyond following any actual caipirinha recipe.  The final result was delicious, and went a little something like this:

Adapted from Jamie Does…

Original recipe calls for potatoes, but I replace it with garlic toast (recipe follows).

Original Note: What’s great about this recipe is that you can use whatever fish you like. Sea Bass, Wrasse, Pickerel, Pollock, Bream or Red Mullet all work well. You could even use lobster if you have it and feel like splashing out! Just talk to your fishmonger and get him to recommend a few of his freshest fish. Greek fishermen make this out at sea, using whatever they’ve hauled into their boat that day, and cooking it in seawater. That’s how I learnt to make this. Because their water is ready salted they don’t need any seasoning at all to achieve a perfectly delicious stew. Genius! Try to use a mixture of fish, so you get all sorts of different flavors and colors in this wonderful stew.

END_OF_DOCUMENT_TOKEN_TO_BE_REPLACED

My dad’s a really good cook.  Okay, he’s a great cook.  Every Sunday my husband and I go to my parents house for dinner.  Every Sunday, he sends me an email the next day with the recipe.  But he refuses to start the food blog that’s waiting to happen.  So, I’ve started it for him.  Recipes and rants will follow, with photos whenever possible. Enjoy.