The Moroccan spice blend Ras el Hanout is shrouded in mystery, the closely held family and trade secret of the Moroccan spice merchants.  Ras el Hanout means “head of the shop,” and each shop’s owner has their own unique mix, the best spice mix their shop can provide. Some blends have as few as ten ingredients, but others are said to have as many as fifty to one hundred spices. Some include such exotics as: grains of paradise, orris root, monk’s pepper, and nigella. Some purportedly included aphrodisiacs like Spanish fly, but if it is a secret how would we know? The result of all of this secrecy is that the blends, that all go by the name of “Ras el Hanout,” can be radically different from one shop to the next on the same street, let alone from towns in the north or south of Morocco. 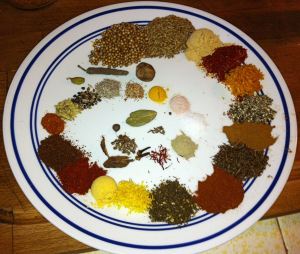 Even if you had a list of all of the spices used in a merchant’s blend, you would still be left with the task of figuring how much of each ingredient to add to the mix. Apparently, most Moroccan home cooks simply throw up their hands and run to the souq and buy it from their favorite spice merchant. World cooks, like myself who do not have a handy souq, make up their own blends and call it “Ras el Hanout.” I have studied dozens of these (non-Moroccan) blends of Ras el Hanout and I have tried to condense them down to their essence.

The amount of each ingredient may vary wildly from one recipe to the next, but all of the mixes I have found contained allspice, cloves, coriander seeds, and ginger. In addition to these, most blends also contained black pepper, cardamom, cayenne pepper (or some equivalent source of capsaicin), mace, nutmeg, turmeric, and white pepper.  These eleven ingredients seem to be the bare minimum for a blend to call itself a Ras el Hanout (although I saw many blends with fewer ingredients using that name). Anise seeds, galangal, saffron and salt were also common additions to some recipes.

After this it seems to be pretty much anything in the spice shop that strikes your fancy. I found Ras el Hanout recipes that included: ajowan seeds, bay leaves, Birdseye Chili Peppers, black (brown) cardamom pods, caraway seeds, cubeb pepper, dill seeds, fennel seeds, grains of paradise, kalajeera (black cumin), lavender, long pepper, monk’s pepper, mustard seeds (yellow), nigella, oregano, orris root, paprika (hot, smoky, or sweet), rose petals (red & pink), rosebuds, sugar, thyme,  and za’atar (which is a blend itself). Actually, to reach the fifty to one hundred ingredients of some of the authentic recipes, it really may be everything in the spice shop (the secret is in how much of each ingredient).

Most of the (non-Moroccan) blends have a selection of between ten to twenty ingredients from the lists above. Even when two recipes have the same ingredient the quantities can vary widely. Cinnamon might be ½ a teaspoon in one mix and 2 teaspoons in another. Everyone is just guessing at what the secret recipes are. The only one I found that looks like it might be based on someone’s family recipe was by Habibi on Food.com. It is also the one that had the most ingredients (twenty).

Last Week I threw together a blend of spices for my Chicken Casablanca. Given my research this week, I am prepared to expand that mix to my own Moroccan Spice Blend, a “Ras el Hanout” in quotation marks. It may not be a “true” Ras el Hanout, but it is the best my shop can produce, after two tweaks from what is in my spice rack. Jan call this a “Ras el Hanout starter kit.” In five or six generations my family may be able to call it a true Ras el Hanout.

** (after smelling the final blend I decided it needed more cumin and cinnamon.)

1. Measure out all of the ingredients.

Tip: If you are planning to store your spice mix, zest the orange and lemon and spread it out to dry the day before you blend the spices. You do not want the moisture of the zest to cause mold in storage.

2. Put all of the spices in a spice grinder (I use a blender with a one cup container) and grind it to a fine power. Use immediately or store in an airtight container.