The spice blend Berbere (when the Ethiopians say it, it sounds like “Barbara”) seems to define the Ethiopian stew called wat. According to Wikipedia Berbere contains: chili peppers, garlic, ginger, dried basil, korarima, rue, ajwain or radhuni, nigella, and fenugreek. A couple of these spices are hard to acquire outside of Africa.

I compared seven recipes for blends that called themselves Berbere from the Internet. I found that they had a very different spice profiles from that listed in Wikipedia. The kind and amounts of each spice varied widely between the recipes, but the spices generally fell in this order: paprika, chili pepper (which may be hot paprika), fenugreek, coriander, ginger, cardamom, cloves, cinnamon, allspice, and nutmeg. Something strange was going on here. If Wikipedia was correct, why were these blends calling themselves Berbere when they had such a different list of spices? It did not help the situation when I checked some of the commercial brands and found that they were closer to the Internet blends.

I had thought that the differences were an attempt to make Berbere more to European tastes. However, further research led me to a second Ethiopian spice blend, Mekelesha (or Wot Kimem), that is added to some of the Ethiopian dishes as a “finishing” spice blend. Mekelesha contains: black pepper, cardamom, cinnamon, cloves, cumin and nutmeg. There is a seventh spice mentioned, “cones,” but I do not know if that is sugar or some exotic. This “finishing” blend are spices that the Ethiopians add at the end of the cooking process to add a fragrance to their dishes. The internet and commercial recipes were combining these two blends and calling the combination Berbere.

Note: According to Ian Carruthers (see below in responses) “cones” refers to “Timz or Indian long pepper” which look like small long pine cones. It is a spicy pepper that has been used in Europe since Roman times, but its use fell out of favor because black pepper, and later chili peppers, were cheaper and easier to grow. It is available on-line from Whole Spice. Thanks to Ian for the clarification. 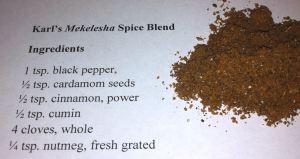 Having identified the basic ingredients I’m ready to make my own blends. I wanted to keep the blends separate, because if you add the “finishing” spices at the beginning of the cooking, the heat destroys all of the volatile elements in them that give the dish that special aroma. I assume that the Wikipedia list is the more “authentic” recipe for Berbere, but I will have to make some substitutions, to make up for the unavailable ingredients.

The recipes for doro wat that I have looked at call for widely varying amounts of Berbere, anywhere from 1 teaspoon to ½ a cup. Having had this deep red dish at Ethiopian restaurants, I would tend toward the higher end of this range, but my memory of the dish is that, while it was spicy, it was not flaming hot. In last week’s Cajun spice blend I used a 50/50 mix of paprika to chili pepper and it was almost too hot to eat. If I am going to uses several tablespoons of Berbere in my doro wat I will need to cut back on the hot chili power or it will be too spicy. Sweet Hungarian paprika should be the primary ingredient in my blend. Some Spanish paprika will give it a smoky flavor (an Ethiopian chef mentioned that this was important in a Youtube on making doro wat). Finally, some Indian chili power will give it the necessary fiery kick.

One source I read suggested that the other spices are added in fairly equal amounts. The real question then is what other spice elements should be added. My own feeling is that garlic should always be added fresh and separately (as well as the problem that some garlic powers have a bitter after taste). Ginger and dried basil, on the other hand, seem natural and good additions. The Internet chef mentioned using “African Basil.” This is not “African Blue Basil,” which is a recent hybrid, but Ocimum gratissimum. However, unless I start growing it myself, regular dried basil will have to do.

Korarima (false cardamom) is only available on-line and at Ethiopian specialty stores, but cardamom is similar enough in taste to use as a substitute. Bitter rue is right out, given my family’s sensitivities. Any herb that causes some people extreme gastric distress is not something I going to experiment with on my delicate family. Ajwain is readily available at the Indian store so it is in.

Nigella, black cumin, is a favorite of mine. The only place I knew to buy it in the past was at a spice shop in Pike’s Place Market, The Souk. For years I would go north to visit my sisters in Seattle, and pick up the key ingredient for my Uyghur naan (not yet posted). Today I found it in Trinethra Indian Super Market. They have had a change in owners recently and the layout and what is available there has changed in the last year. It is a very friendly store and random customers will come up and offer assistance if you look confused.

The final ingredient of Berbere is fenugreek. In addition to the chili pepper, this is considered an essential ingredient. You can leave out an ingredient or two, but if there is no fenugreek then it is not Berbere.  The Internet blends were all over the map for this ingredient, from as little as 1/8 to 2 teaspoons. I plan to go with the advice that the other ingredients should be in fairly equal amounts.

For the the second spice blend, my Mekelesha finishing spices, I need about 2 teaspoons for my doro wat. I have chosen the proportions for my blend to match this need. The clove and nutmeg are very strong flavors so I am planning to go light on them.

1. In a small pan toast the ajwain, cardamom seeds fenugreek and nigella over a medium heat. Let them cool.

2. Put the seeds and the rest of the ingredients into a spice grinder and process them to a power.

1. In a small pan toast the cardamom seeds, cumin and cloves over a medium heat. Let them cool.

2. Put the seeds and the rest of the ingredients into a spice grinder and process them to a power.

Tip: If you have and are using long pepper you can run it through a spice grinder or grate it on a microplane like nutmeg.