I have recently been making excellent scones, but why leave it at excellent? My mother, Claudia, used to make raised dough cinnamon pinwheels. These were heavy, sweet and sticky, and took hours to make. Could I make a lighter, slightly less sweet cinnamon pinwheel that I could make in much less time? 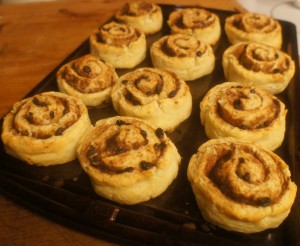 To keep this recipe low sugar I did not add any to the scones, so these are English scones. The cinnamon, sugar and currents are all concentrated in the swirls.

1. Measure the flour, baking powder and salt in a flour sifter. Sift the dry ingredients several times to mix them thoroughly.

Tip: The trick to any quick bread is to not overwork your dough. By completely mixing the dry ingredients you do not have to worry about pocket of baking power later when you add the wet ingredients.

2. Place the dry ingredients in a coverable bowl or plastic bag and put it in the freezer for at least an hour.

Tip: You can cut the chilling times or leave them out altogether, except for the rest after mixing of the dry and wet ingredients. Your scones will just be a little less fluffy and perfect.

3. Return the flour mixture to the mixing bowl and take the butter out of the refrigerator.

Tip: Many recipes call for you to bring the ingredients to room temperature before mixing. Scones are just the opposite. You want each ingredient to be as cold as possible while you are mixing. This includes your hands. If you have warm hands, dip them in ice water before handling your dough.

4. Slice the butter into thin pats and cut it into small pieces with a pastry cutter. Rock the cutter into the flour and butter pats and use a knife to clean the cutter between cuts.

Tip: If you do not have a pastry cutter I really recommend that you get one. They are not expensive and they make the task of cutting the butter quick and easy. You may use a fork or squeeze the butter with your fingers until it resembles crumbs, but this is slow and increases the chance of melting the butter into the flour. For good flaky scones, this is a bad thing.

5. Put the egg into a measuring cup and beat it lightly.

6. Add enough milk to make 1 cup of liquid and beat lightly to mix completely. Add one more tablespoon of milk.

Tip: Many recipes call for buttermilk, whole milk or cream, but I use 1% lactose free for Eilene. They may be less rich, but we think they are just fine.

7. Add the milk mixture to the dry ingredients and gently fold the dough with a spatula.

8. When there is almost no dry flour showing, stop and let the dough rest for 5 minutes in the refrigerator.

Tip: You do not want to overwork the dough. The more you work it, the more gluten is created. This is a good thing for breads, but a bad thing for scones and biscuits.

9. Turn the dough out onto a floured board. Flour your hands and pat the dough into a ½ inch thick square.

10. Turn the dough out onto a floured board and pat it into a ½ inch thick square.

11. Letter-fold the dough in thirds and pat the dough down.

12. You will now have a rectangle of dough. Letter-fold the long sides to the middle and then pat in down.

13. Flour your hands again and pat the dough into a ½ inch thick square.

14. Wrap the dough in plastic wrap and let it rest in the refrigerator for 10 minutes.

17. Dust the dough with the cinnamon and spread the brown sugar evenly over the dough, leaving one inch bare on the edge away from you.

Tip: This bare edge will help you seal the roll when you role it up.

18. Scatter the currents evenly over the square of dough.

19. Starting with the edge closest to you, use the board scraper or a knife to make sure that the dough is not sticking to the board.

Tip: Use the scraper or knife after each turn to make sure the dough is free.

20. Loosely roll up the dough into a long sausage. Just before you finish rolling, brush the bare edge with cream and then let the role rest with the seam side down for two minutes.

21. Cut the roll into ¾ -1 inch slices and put the scone pinwheels on a Pam-ed baking sheet. Brush the tops with the cream and let them rest for 10 minutes.

23. Serve immediately, while still warm from the oven.