I need a starch dish to go with my chicken and pears. Noodles did not seem right. Potatoes or rice did not fit the hole in my head either. Since my dish is sort of French influenced, I had considered couscous to make it a bit Algerian. I tried searching for chicken and pear recipes and found several for soups with barley. That was the one that sounded right. 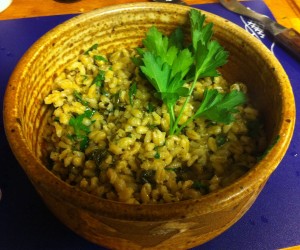 I could just boil the barley and serve it plain, like rice, but that just isn’t me. The sauce for the chicken is pears, onion and sage. The barley should complement those flavors. A bit of chicken broth and butter, toss in a bit of onion and a few herbs, that is more my style.

After Dinner Note: Barbara really liked this. She finished it off.

1. Six hours before dinner, soak the barley in three cups of cold water.

Tip: Actually better to soak it over night for the best result.

2. Melt the butter in a medium pot with a tight lid over medium high heat. Sauté the onions until just wilted, about two to three minutes.

3. Add the seasonings and the chicken broth to the pot.

4. Drain the barley and stir it into the pot.

5. When the pot comes to a boil, reduce the heat and cover.

Tip: Use a dish towel to give the lid a tighter seal. Tie the ends of the towel up to keep them away from the heat.

Tip: Do not open the pot during this time. There should be enough liquid in the pot to keep the barley from scorching if your lid is tight enough to keep the steam from escaping.

7. Almost all of the liquid should be absorbed by the barley by now. Remove from the heat and without opening the pot let it steam for 10 minutes.

8. Add the flat parsley, fluff the barely and transfer it to a serving bowl.

9. Garnish with a sprig of flat parsley and serve.

Filed under Side Dishes, Starches, Vegan