Jan went to Sonoma a few weeks ago and while she was there she went to a Venezuelan restaurant, Pica Pica. She came back raving about arepas, Venezuelan corn pocket breads. I was ordered to learn how to make them. 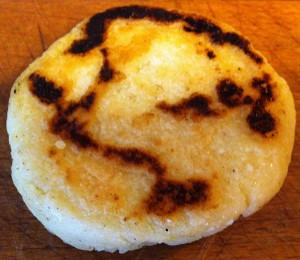 Finding the recipe on the internet was easy, as was the recipe itself. Mix arepas flour with salt, hot water and butter. Finding the special flour, masarepa, to make them was the challenge.

I knew that I would not find it at the local American supermarket, but I did not have high expectations of success at Chavez Supermarket either. This ethnic market caters more to a Mexican clientele and not so much to South Americans.

I went to the flour isle. There was lots of masa harina, but nothing I could identify as masarepa. I finally went up to the cashier and asked if they carried “ah-ra-pahs” flour. He had no clue about what I was looking for. Neither did the other cashier.

However, the security guard who was watching this scene unfold, pops up, “He’s looking for “ah-ray-pahs” masa. It is in the yellow bag.” I was sent back to the flour isle and the only bag that had any yellow was clearly marked “masa harina.” It looked like my quest was going to fail.

A minute later the guard walks up and checks himself. He doesn’t find what I’m looking for either. However, like American supermarkets with their Kosher or Asian food sections, some ethic markets have special sections for culturally related countries.

The guard led me down another isle. There on the bottom shelf in the South American foods, tucked away in a corner, was a bright yellow bag. Success! I now could make my arepas.

Several South American countries make arepas. In Columbia, they flatten the dough into a thin pancake and fry it in oil. They look and are used very much like tortillas. In Venezuela, they make their arepas much thicker.

The Venezuelans form the wet dough into an English muffin sized disk. These are then lightly fried on both sides. They then bake the arepas to finish cooking the inside dough.  This multi stage cooking process allows you to cut a pocket in the breads to be stuffed with wonderful things.

1. Stir the salt into the masarepa.

2. Make a well in the corn meal and pour in the hot water and melted butter into the hole.

3. Mix well until thick and then knead a few times on a lightly masarepa-floured board.

4. Form the dough into a ball and cover plastic wrap. Let the dough rest for 15 minutes.

Tip: This gives any dry meal time to completely absorb the liquid.

5. Divide the dough into 8-10 balls and flatten them until they are about three inches in diameter.

Tip: Suggested tips for this are flattening them with a pot, but I found it easiest just to use my fingers to shape them and then to lightly finish them off with a rolling pin. However you flatten them, cracks will form around the edges which you will have to use your fingers to smooth out anyway. Your finished product should look like a slightly small white hockey puck.

Note: Actually how big and thin you make them depends on what you plan to fill them with. You can make them hors d’oeuvre sized or even small plate sized, like some of the ones that they make at Pica Pica.

Tip: This prevents them from drying out.

7. Heat a skillet over medium heat and add a tablespoon of corn oil.

8. When the oil is shimmering, place several arepas in the pan

Tip: Do not crowd them, but they will not expand much as they cook. Leave enough space that you can turn them over without damaging the others.

Tip: They should be dry and slightly browned, but not burnt.

Tip: To check for doneness, cut into the edge of one of the arepas to see if the corn meal in the center is fully cooked

12. Serve hot with your favorite filling, for mine I am making pulled pork