Jan requested a “light” dinner, by which she meant low carbohydrates. I decided to do “South of the Border” salmon patties. This, of course, called for guacamole. Having already mixed Mexican and Northwest cuisines, I decided to take it a step further and mix grilled plums with my avocado. 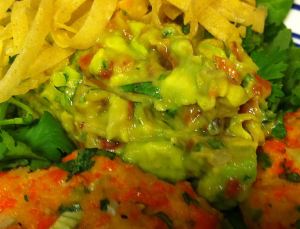 Note: Having finally switched to a gas grill I can just run out and grill something in a few minutes—rather than waiting for a half an hour for my coals to be ready. However, I am still not convinced that the char and taste are not superior with a charcoal grill.

1. Start one burner of your grill and close the lid. Let the grill heat up for five minutes.

2. Cut the plum in half and remove the pit.

Tip: You should end up with two round 3/8 inch thick slices and two domed slices.

4. Put the slices on a bamboo skewer and grill for 20 minutes, flipping the fruit half way through.

Tip: Place the “domed” slices on the outside edges of the skewer. They will finish cooking before the larger slices and you can slide them off the skewer when they have finished cooking.

5. Cool and finely dice the grilled plum and put it in a medium mixing bowl.

7. Mash the avocado into a chunky paste and fold it into the other ingredients, mixing well.

8. Transfer the guacamole to a serving bowl or build individual salads, adding a large scoop of guacamole to each.