In this cast the Southern is Southern US. This recipe is from last Sunday’s dinner and I am just now getting around to posting it. I am doing a California Fusion Char Siu Flavored Pork Loin and I wanted a non-traditional vegetable dish to go with it. I decided to adapt a Cook’s Illustrated recipe to my purposes. 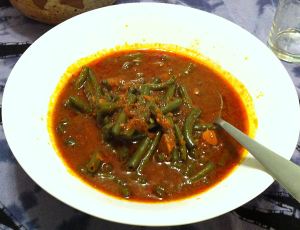 Note: This week has been pretty hectic for me, school has started again and it is the tenth anniversary of my father’s passing. I am finally facing transcribing the interviews that I took on his death bed. Part of this is the emotional load, but part is also the fact that since chemo I have been a bit “unstuck” in time. There is no difference to me between things that happened a year ago or ten years ago—they are all in the undifferentiated  “past.” My sister, Karen, has cracked the whip and said, “Do it!” I will post when I can, but much of my time will be spent transcribing eight hours of tapes.

Anyone who had school lunches in the 50’s and 60’s will remember the soft green beans from the cafeteria—these are a staple of Southern cooking. Jan remembers them with disgust, but I—and apparently my son-in-law, Chris—actually liked them. One problem with making them is that it takes two hours of simmering before the outer shell of the beans become soft enough for the interior flesh to start absorbing the braising liquid. Cook’s Illustrated found a way to speed up the process—baking soda.

The C. I. recipe was for a Mediterranean tomato based dish, but I wanted something Asian. I used their technique, but I replaced the acid in the tomatoes with Chinese black vinegar. once I had made that change it was easy to go “full on Chinese” with ginger, chili garlic sauce, and dark soy sauce.

1. Put the oil in a large sauté pan and cook the onions with the salt until soft, about five minutes.

2. Add the garlic and continue sautéing until fragrant, about one minute.

Note: I used two cups of water and I thought the sauce a bit too thin when the beans were done.

4. Bring the pan to a boil, reduce the heat, cover and simmer for ten minutes.

Tip: This simmer give the baking soda time to break down the pectin in the cell walls.

5. Stir in the black vinegar, soy sauce, and white pepper.

Tip: The acid in the vinegar neutralizes the base in the baking soda—turning them into a salt—and prevents the beans from turning into mush.

6. Continue simmering the beans until soft and plump and the sauce has thickened, about another 40-50 minutes.

Tip: Stir occasionally to make sure that all of the beans are submerged at least part of the time.

7. Transfer to a serving dish and serve warm.