I was making Asian cabbage rolls and I wanted to serve a vegetable side dish. When I looked at how much Chinese chive stem I had bought, it seemed a bit scant for five people. I had also bought an English cucumber, that I had planned to pickle, but I decided instead to use it to stretch the chive stem. 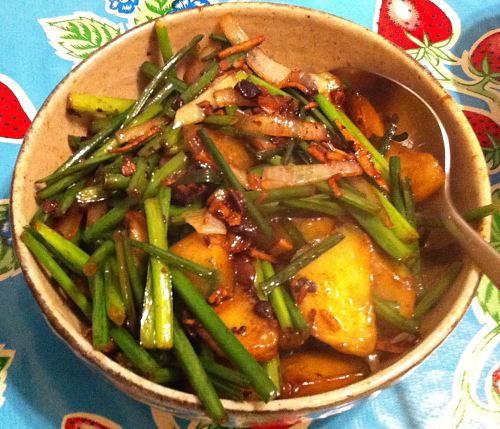 In America we almost always eat our cucumbers either raw or pickled. For food safety reasons, the Chinese almost always cook their vegetables. When we lived in Chengdu, Sichuan we were served fried cucumbers. It simply would not have occurred to me to fry something like a cucumber.

I have tried to fry cucumbers before, but I had run into a problem. In China, most home cooking is done over gas or coal fires. An American electric range simply cannot get a wok screamingly hot enough to sear a wet vegetable like a cucumber. My original dish came out more “steam fried.” To solve this problem I decided to salt the cucumber pieces to remove some of the excess moisture.

1. Measure the first five ingredients into a small bowl and set it aside.

Tip: It is usually a good idea to have your sauces measured and ready when you are cooking Chinese dishes. In the middle of a stir fry, you do not really have time to fuss around with measuring spoons.

2. Peel and roll cut the cucumbers into bite sized pieces.

Tip: For this dish I like to roll-cut the cucumbers. Take a diagonal slice from the cucumber and then roll it a quarter turn. Take a second diagonal cut. The cucumber piece will be wedge-shaped on one side and rounded on the other. This is a more interesting shape that simple round or half moon slices. Continue rolling and cutting until done.

Note: If you like bitter, you may remove only some—or none—of the peel. I usually take off five strips so that there is an alternating white and green pattern around the cucumber.

3. Sprinkle the salt over the cut cucumbers and toss.

4. Let the cucumbers sweat for half an hour, tossing to redistribute the salty liquid.

5. Drain and dry the cucumbers with a paper towel.

6. Cut the chive stems into 1½ inch pieces and set them aside.

Tip: While the flower heads are edible, I find the a bit too tough and chewy.

7. In a sauté pan, or wok, fry the cucumbers in the oil over high heat.

Tip: When you first start frying let the pieces sit undisturbed for the first 2 minutes, before tossing them. This gives them a chance to sear. As you toss them it will release liquid and that would prevent searing.

8. Give the cucumbers a quick toss and continue frying.

Tip: Use a pair of chopsticks to turn over any pieces that ended up on the first side.

10.Stir fry until the stems are tender and the onions and cucumbers are translucent, about three minutes.

11. Pull the vegetables to the sides of the pan and sauté the garlic in the hole in the middle until fragrant, about one minute.

12. Add the sauce and toss to coat the vegetables.

13. Stir fry for 1-2 minute more, until the sauce has thickened.

14. Transfer to a bowl and serve immediately.