Adapted from an Arabic Kitchen recipe

I was making Iraqi barbecued chicken and I wanted an Iraqi vegetable side dish. Many Iraqi vegetable dishes include eggplant, which I cannot digest. One recipe I found, that is frequently serve at Iraqi meals, is turshi, mixed pickled vegetables. 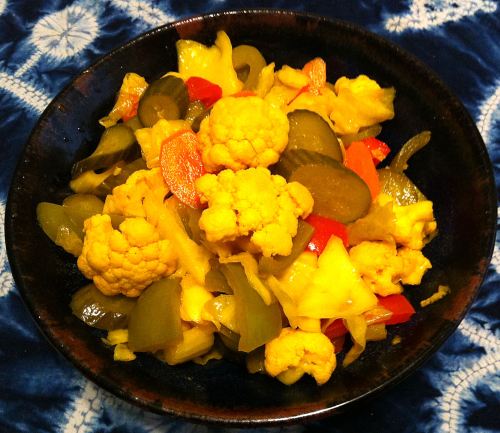 Note: These vegetables take days to pickle, so make them three days before you plan to serve them.

After Dinner Note: The reviews on this dish were mixed. While Son-in-law Chris and I liked the sourness of it, Jan and Miriam were less fond of these vegetables. Part of the reason may be that they have been working with a corporate food lab who’s chefs compete with each other on who can make the most sour dish. It has kind of put them both off “sour.”

1. Cut the vegetables and put them in a large mixing bowl.

2. Mix the curry powder, turmeric, sugar, and salt in a small bowl.

3. Sprinkle the spices over the vegetables and toss to coat.

4. Let the vegetables absorb the spices to 20-30 minutes.

5. Put the liquid ingredients in a non-reactive pot large enough to hold your vegetables with the liquid.

Tip: An enameled pot is best.

6. Bring the vinegar mixture to a boil and then add the vegetables.

7. Return the pot to a boil and simmer the vegetables for 3 minutes, stirring constantly.

8. Remove solids from liquid and let them both cool down separately.

Note: If you leave the vegetables to cool in the liquid, they will overcook.

9. Once the liquid and vegetables are cool store them in a seal-able jar.

Tip: To keep the air away from the vegetables, while they are pickling, you can cover the surface of the liquid with plastic wrap before sealing the jar.

10. Pickle the vegetables for three days in the refrigerator

11. Transfer the pickles to a bowl and serve chilled.