Over the last few years, I have perfected my biscuit recipe. While I usually simply make biscuits, sometimes I use the dough for other purposes.  Today, I was craving my mother’s sweet rolls.

I am diabetic and Jan doesn’t like too sweet, so I do not make my mother’s sticky buns any more. However, I still like the flavor. Using half of my dough for biscuits—to please Jan—I can use the other half to make what pleases me—which is sweet cinnamon buns.

Note: If you wish to make a more savory biscuit, you may add herbs and/or spices at this point.

2. Using a box grater, grate the frozen butter into the flour mixture.

Tip: Stir the butter shred into the flour so that they do not clump together.

3. Use a pastry cutter, to break the butter shreds into tiny bits.

Tip: Many recipes have up use a pastry cutter on large lumps of butter. While this eventually works, the heat created by repeated chopping starts to warm the butter. With the frozen butter shreds you only have to chop the butter a few times to get a through mix.

5. Add most of the milk to the dry ingredients and use a spatula to combine them.

Tip: If necessary, add a bit more milk to make a soft dough.

Note: Reserve ⅛ of the milk mixture to help seal the buns.

6. Turn the dough onto a lightly floured surface and knead 10-15 times.

7. Roll the dough to one half inch thick and cut six biscuits out with a 2 inch biscuit cutter.

Tip: You may turn all of the dough into cinnamon buns, but today I am using the rest for this dough to make regular biscuits for Jan.

Note: If you are planning to make 12 buns double the filling ingredients.

8. Lightly flour one of the disks of dough and roll it out to about 3 inches in diameter.

Note: I usually do not include step by step photos, but sometimes word are not enough where a picture would make it obvious what you are trying to say.

Tip: You want to leave a flat hump in the middle of the dough with the outer edges tapering down to a fairly thin sheet of dough.

Note: If you roll out the dough into a flat disk the top of the bun will be very thin and the bottom very thick as you gather the outer edges of the disk over the filling. By leaving the middle thick and the edges thin, they even out to make a bun with the filling in the middle.

10. Lay a pat of butter on the hump in the middle of the disk.

Laying the butter on the hump

11. Sprinkle a good bit of cinnamon over the butter.

Sprinkle the cinnamon on the butter

12. Sprinkle a teaspoon or two  of the brown sugar over the cinnamon.

Sprinkle the sugar on the cinnamon

13. Lightly wet the edges of the dough disk with the egg/milk mixture.

14. Starting at 12 o’clock pull the edge of the disk slightly more than half way over the filling.

The first and second folds

15. Take the edge at about 2 o’clock a pull it over the first fold.

Tip: The dough between the folds goes under the fold you are working with.

16. Repeat the folds around the clock until you reach 10 o’clock.

Tip: Gently press down to push out any air inside the bun.

17. For the final fold, the dough on either side stays on top as you pull it over the ends of the other folds to seal the bun. 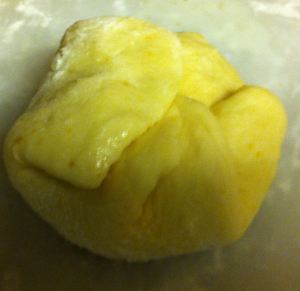 Tip: It is very important that the bottom of the bun is tightly sealed or the butter and sugar will run out as it is baking.

18. Turn the bun over and pat it into shape if necessary.

Ready for the oven

19. Place the bun on a parchment paper lined baking tray and brush the top with the egg/milk mixture.