In the continued effort to make meals for Jan that she doesn’t have to do any biting—she has two front tooth temporary caps—I suggested salmon for dinner. She thought yams were a good soft starch to go with the fish. She then suggested that this was an Orange Dinner.

The salmon dish was barely a recipe—bit of salt and a layer of thin lemon slices. I popped in under the broiler for 10-15 minutes. Finally, I transfer the fish gently to a serving platter.

The yam was even less of a recipe. I was making pumpkin pudding for dessert and I just added to the oven as it was cooking. A pat of butter and it was finished. 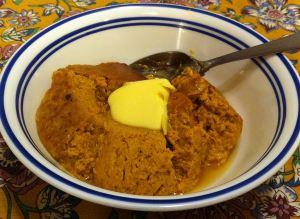 I needed a orange dish salad to complete the meal. Jan suggested mandarin oranges. This orange salad was the only new recipe for this meal. 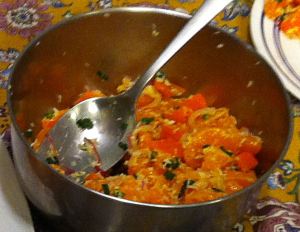