The prospect of fresh hot bread is one of the joys and reasons to get up in the morning. Most cultures have some form of baked good, but in the end it is mostly flour mixed with some kind of liquid and then baked—or fried.  However, because of the complex chemistry involved in exactly what other ingredients you add—and how you treat the resulting dough—it produces amazingly different results. 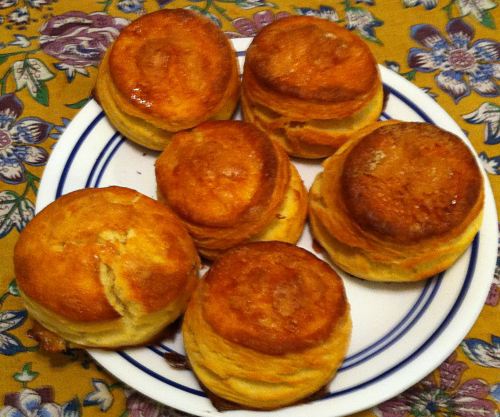 Note: Some may think that I have gone into inordinate length in detailing this recipe. Small changes in how you make your bread has big consequence in the final product. I have tried to give you not only the list of ingredients, but the reason and exact steps you need to make these biscuits. While at first it may seem overly complicated, after you have made them a time or two the techniques will come to seem natural and easy.

Several years ago, I posted a recipe for British scones. I have also posted a recipe for American biscuits. Overtime, I have tweaked and combined these recipes into more of a hybrid recipe, a cross between the American and British recipes, with a bit of French pastry technique thrown in for good measure. They are so good that I make them 2-3 times a month.

British scones—not to be confused with British biscuits (American cookies)—look almost the same as American biscuits. I found by comparing several recipes that the major differences in the ingredients are that scones contain an egg, more sugar, and usually cream as the mixing liquid. American biscuits usually do not use an egg and use milk or buttermilk as their liquid component. It is in the technique of combining the butter and flour that the major difference between these recipes really reside.

With the British scones, melted butter is worked into the flour. This process causes the fats in the butter to bind with the proteins in the flour to inhibit the formation of gluten bonds—less gluten means a more tender scone.  Between the kneading—to create a weak gluten network— and the added egg, the scones develop enough structure to keep their shape while baking.

American biscuits, on the other hand, start with room temperature butter that is added in small bits and then the wet dough is mixed just enough to moisten all of the dry flour. While the dough is kneaded a bit—to give it a little gluten structure—you have to be careful not to over-work it. The formation of too many gluten bonds would make for a rock hard biscuit.

Over time, I have included a bit of French pastry technique in making my biscuits. I freeze and grate the butter into small shreds. A few chops with a pastry blender turns these shreds into tiny bits of cold butter. Adding and mixing in my liquid ingredients, I then knead to moisten all of the dry flour and to create some gluten structure within the dough.

I then roll the dough into a large sheet. Letter-folding the dough in both directions produces 9 layers of dough—while there is a strong gluten structure with each layer, there are few bonds between the layers. Repeating the rolling and folding produces 81 layers of dough.

I then roll out my dough ball to half an inch thick. My sister—Karen— told me that I roll my biscuits out thinner than anyone she has ever seen. I then cut out and bake the biscuits. The trapped bits of cutter melt and steam to balloon each layer of the biscuit. The final product is usually 1¼-1¾ inches tall.

Note:  It is important to use a sharp-edged biscuit cutter to cut out your biscuits. I used to use a jar lid as a biscuit cutter. The dull edge of the lid pinched the layers of dough together around the edge of the biscuit—instead of slicing through each layer. Instead of being free to rise nice and evenly, the biscuits puffed up in the center and warped around the edges as the layer’s edges stuck together.

Note: I have edited the direction in this posting to include the changes I have posted later (see here).

Other things needed (order of use) 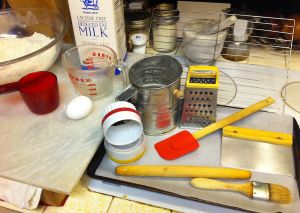 Note: About 15 minutes before you are ready to start baking, pre-heat your oven to 400º F.

Tip: Putting a whole stick of butter in the freezer gives me a handle to keep my fingers away from the grater blades as I shave off six tablespoons.

Note: You do not want the butter to be frozen solid, because it then becomes hard to grate.

Note: If you have not blended your sugar to break up the bits of zest, you may need to add the sugar after sifting, as the zest will get caught in the flour sifter.

3. Using a box grater, grate ¾ of the stick of frozen butter into the flour mixture.

Tip: Half way through, stir the butter shreds into the flour, so that they do not clump together.

4. Use a pastry cutter, to break the butter shreds into tiny bits.

Tip: Many recipes have you cut the butter into large lumps and then you break them up with the pastry cutter. While this eventually works, the heat created by the repeated chopping starts to warm the butter. With the frozen butter shreds you only have to chop the butter a few times to get a thorough mix.

Note: I used to bake these biscuits at 425º F, but I found that the tops over-browned before the center was cooked through. Lower and slower works for me.

6. Put the egg in a large measuring cup and lightly scramble it.

7. Measure one cup of milk and add some of it to the egg.

Tip: This allows you to scramble the egg well, without splashing it all over.

10. Make a well in the dry ingredients and add the milk mixture.

Tip: I have found that it is easier to add more flour to dry out a “wet” dough than to add liquid to a “overly dry” dough.

Note: Keep the measuring cup close to hand. You will add some more milk to it to brush on to the tops of the biscuits.

11. Use the fork to combine the milk and flour mixtures, until most of the dry flour has been incorporated into the dough.

Tip: Unless you have cold hands—like my wife—you want to handle the dough as little as possible. Warm hands—like mine—will melt the butter.

12. Turn the dough onto a lightly floured surface and knead 7-8 times, until there is no visible dry flour.

Tip: Flour your hands and the kneading board well.

Note: Use the spatula to scrape out all of the bits of flour from the bowl. 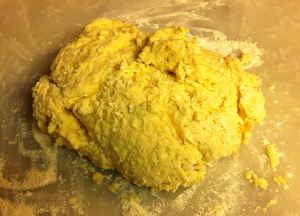 Tip: Flour your rolling pin well, so that it does not stick and cause tears in the dough sheet.

Note: The dough sheet will be less than ¼ inch thick when you have it all rolled out. 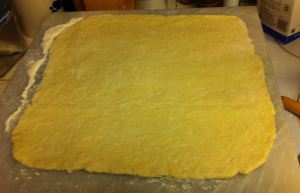 14. Starting at the edge closest to you, fold one third of the dough sheet over the middle third.

Tip: You may need to use a bread board scraper to free the dough from your kneading surface.

Note: This is called a letter-fold. 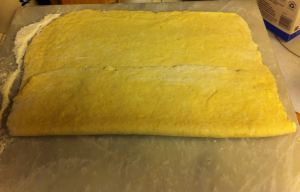 15. Take the edge that is farthest from you and fold that third over the first two layers.

Note: You will now have a rectangular piece of dough, three layers thick. 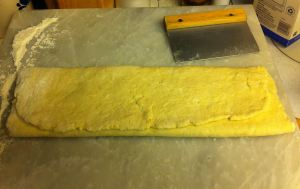 16. Letter-fold the outer edges of this rectangle in to the center. 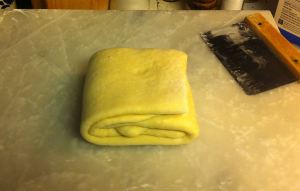 Tip: This gives the gluten bonds time to relax and makes it easier to roll out again.

18. While the dough is resting, line a large lipped baking sheet with parchment paper.

Tip: I used to grease my baking sheets, but the biscuits tended to stick and burn. The parchment paper needs no grease.

19. Re-flour your board and turn the square over, 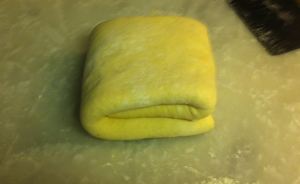 Flipping the dough, so that the fold is on the bottom

Note: Within each layer of dough, the cold butter will be squished into thin flakes, trapped in a gluten web.

Tip: First the top and bottom edges and then the sides.

Note: You will now have a five inch square of dough with 91 layers.

22. Roll the dough out to one half inch thick.

Tip: Turn the square over, so that the open fold in on the bottom.

Note: This will be about an nine inch square of dough.

23. Cut the biscuits out with a 2¾ inch biscuit cutter.

Tip: I get about seven biscuits from this first cut. 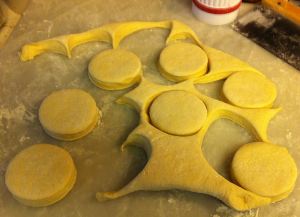 24. Place the biscuits on the baking sheet about an inch apart.

25. Gather up the remaining scraps and form them, into dough ball.

Tip: I roll out this dough ball and letter fold it to create more layers.

Note: At the end of this process I am usually left with about a biscuits worth of dough that it is hard to cut into an even biscuit. I like cinnamon rolls but the wife will not let me make them as being too tempting. I turn this last bit of dough into a cinnamon bun. I roll it into a round and place a pat of butter, a tablespoon of sugar, and a good sprinkling of cinnamon in the center. pinching in the edges, I seal the filling into the bun. If you wish you may roll out all of the biscuits and make them into cinnamon buns. 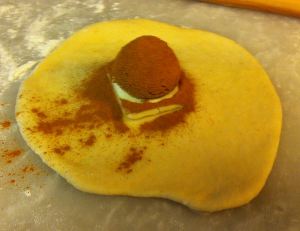 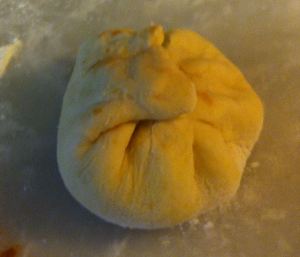 Pinching the edges to seal the cinnamon bun

27. Brush the tops of the biscuits with milk.

Tip: Use the original measuring cup and the pastry brush.

28. Sprinkle half a teaspoon of orange sugar over the top of each biscuit. 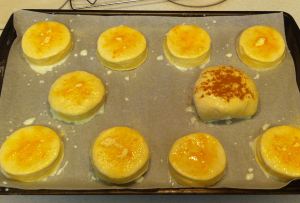 Brushing the tops with milk and adding the sugar topping

30. Transfer the biscuits to a wire rack for 5 minutes to cool. 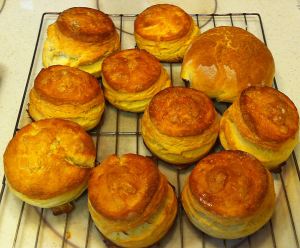 31. Serve warm with butter and jam/marmalade.