Jan’s school friends—Barb from second grade, Pat from I think about seventh grade—are in town for Stitches. This means another meal to create—with no meat with a face or chunks of tomato. A few ago I made some Jamaican coconut fish parcels that had a very flavorful broth, I decided to look for a soup that was similar, but different. 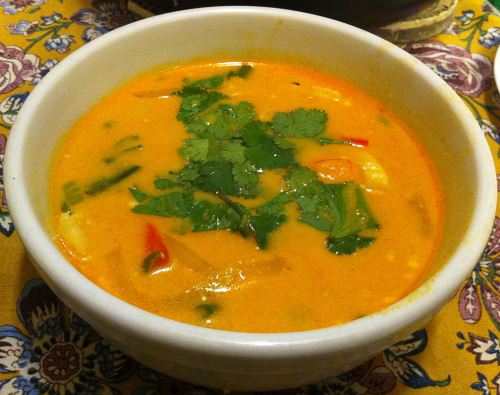 After Dinner Note: This came out really, really well.

1. Peel the shrimp and set them aside.

Tip: You should cover and set the shrimp in the refrigerator until you are ready to use them.

Note: I usually prefer to start with shell on shrimp to make a quick shrimp stock.

2. Put the shells in a soup pot with one tablespoon of melted butter.

3. Cook the shells for 3-4 minutes, over medium high heat, stirring frequently until they are well pink and crispy.

4. Add one cup of water and bring it to a boil.

5. Cover and reduce the heat, simmer the shells for 8-10 minutes.

6. Strain the broth into a small bowl and reserve it for later.

7. Rinse your soup pot and melt teo tablespoons of butter over a medium heat.

8. Sauté the onions with the salt until they are soft, about five minutes.

9. Pull the onions to the sides of the pot and sauté the garlic until fragrant, about one minute.

10. Stir the garlic into the onions and pull the vegetables to the sides of the pot again.

11. Add the tomato paste to the hole in the center and cook it until it starts to darken, about 2-3 minutes.

12. Sprinkle the spices over the tomato and continue cooking until the pot becomes fragrant, about another minute.

13. Stir the shrimp stock into the pot and deglaze the pot.

14. Add the fish stock and coconut milk to the pot and bring it to a simmer.

Tip: Yes, I know that it would be better if I made my own fish stock, but I never seem to have the time or inclination.

16. Stir in the shrimp, peppers, green onions, fish, and scallops .

Note: The original recipe called for using only sea bass, but at $30/lb. that is too rich for my blood.

17. Cover the pot and simmer the soup for another 8-10 minutes more, until the fish is fully cooked and the peppers are soft.

18. Stir in the lime juice and add more salt and pepper, if needed.

19. Serve the soup with the cilantro, rice, and more fresh lime juice on the side.

Tip: Diners add as much rice as they wish and garnish the individual bowls with the fresh cilantro. Some diners may want extra lime juice.