Several weeks ago I made enchiladas. I made the recipe basically the way my mother, Claudia, made enchiladas. One problem that I had was that even though the enchiladas looked good in the pan, they tended to fall to pieces as you try to transfer them to a plate, leaving an unattractive mess. There had to be a better way. 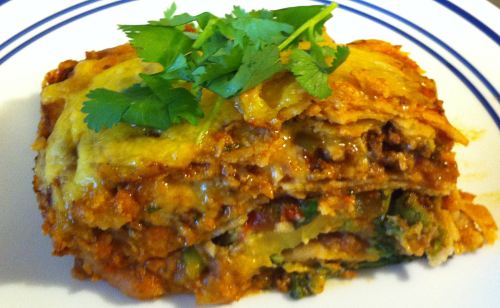 Enchiladas are a bit of a complicated, “fussy” dish. You have to first cook the filling and then carefully fill up and roll each tortilla. Although I am generally opposed to casseroles—too many years of being a PK—I decided that it would be easier to make enchiladas more like a lasagna. I know that this is not much of an improvement labor-wise, but it makes the final product much easier to serve as an attractive presentation.

Note: On a side note, It has actually been a couple of weeks since I made this dish.  When wife Jan and daughter Eilene discovered that I was (finally) writing up this recipe they went, “Oh! Let’s have that for dinner!”

1. Slice the onions, pole to pole, into thin half moons.

2. Cut the chilies cut into matchsticks.

3. Coarsely chop the leafy parts of the cilantro and set them aside as garnish.

5. Form the beef into one large patty

6. Put the oil in a large sauté pan and brown the meat well on both sides.

Tip: This is an America’s Test Kitchen trick to get the maximum flavor without drying out your meat.

7. Transfer the beef to a plate to cool.

Tip: When the meat is cool enough to handle break it into small pieces and set them aside.

Note: You may use two forks, but fingers are still the best tools for this.

8. Deglaze the sauté pan and heat it over a medium high heat.

9. Sauté the onions, chilies, and cilantro stems until soft, about 5 minutes.

Note: You may use canned chilies, but fresh is almost always better.

10. Add the beef  to the mixture and continue sautéing for another 3-4 minutes.

11. Remove pan from the heat and add half a cup of the enchilada sauce.

12. Toss to coat the ingredients with the sauce and let the mixture cool a bit.

13. Put the refried beans in a microwave safe bowl and warm them for 1-1½ minutes.

Tip: Heating the beans a bit makes them easier to spread on the tortilla.

14. Spread half  a cup of the enchilada sauce in the bottom of a casserole dish.

15. Taking two tortillas, cut them in half, and lay them cut-side out in the bottom of the pan.

Tip: The cut edge of the tortillas are slightly smaller than my 8 inch pan. If you lay each half moon at a corner, this allows you to mostly cover the edges of the square pan with the round tortillas with only small a hole in the center of the pan.

16. Lay one whole tortilla in the center of the pan to cover the hole.

17. Spread half of the beans over the tortillas in the pan.

18. Spread half of the beef filling over the beans.

Tip: If you are using cheese, place some cheese over the filling.

Note: If using cheese, save some to sprinkle over the top of the enchilada casserole during the last ten minutes of baking. Wife Jan does not like cheese with her meat, so I make this dish half and half—some with cheese and some without, the cheese on top tells you which side is which. 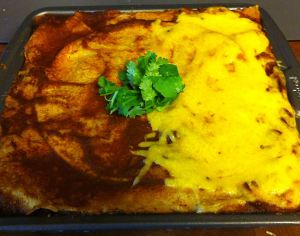 19. Peel and slice the avocado, laying one slices over the meat filling.

20. Spoon some of the enchilada sauce over the top.

Tip: You should have about half of the enchilada sauce remaining when you have finished this step. Plan to use the whole bottle of sauce for this dish.

Note: When you are finished you should have used up all of your ingredients, except for a few  tortillas and about an half cup of the sauce.

23. Cut two more tortillas and make a final layer with the tortillas.

24. Brush any remaining sauce over the tortillas.

27. Remove the foil and rotate the pan, so that the dish cooks evenly.

Note: If using cheese, spread the remaining cheese over the top of the enchiladas.

30. Cut out servings and garnish them with the fresh cilantro.