My wife Jan has her college friends staying over the weekend. Her friends come with a long list of food restrictions—no wheat, rye, barley, tomatoes, citrus, or lactose—so it is quite the challenge. Japanese cuisine tends to have few of the ingredients I needed to avoid. I decided I would make miso soup, sushi, and a selection of Japanese pickles. 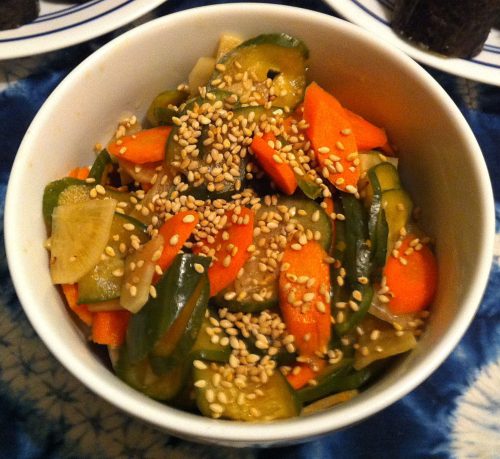 I found a book Izakaya: Japanese Bar food. A few months ago, I made some pickled cucumbers for my Japanese bar meal. Because it was a last minute decision, I did not have the hours necessary to marinate the cucumbers and carrots. For my ramen meal, I took the time to make the bar style pickles more like the books recipe. Today, I had a large daikon radish in my vegetable bin and I decided to add them to the mix.

The original recipe called for using a tablespoon of soy sauce. Many soy sauces contain some wheat, and while the amount of gluten is negligible, my guest asked me not to use it. Tamari—which is soy sauce that is made without wheat—is the most common substitute.

1. Put the vinegar, sugar, tamari and ginger in a sealable quart plastic bag.

Tip: Seal and shake to dissolve the sugar.

Note: The original recipe called for mincing the ginger. I decided that I wanted the ginger flavor, but not the tiny bits of ginger scattered over my pickles. Large pieces of crushed ginger are easy to separate out before serving the pickles.

Tip: A mandoline is very useful for making even, thin slices.

3. Slice the carrots on the diagonal into ⅛ inch thick ovals.

4. Peel and cut the daikon into quarters lengthwise,

6. Put the vegetables into the bag and press the air out.

7. Seal the bag and refrigerate for at least four hours.

Tip: Flip the bag occasionally to ensure all of the vegetables are in contact with the pickling sauce.

8. Transfer the pickles to a serving bowl or individual small plates.

9. (Optional) Garnish with the sesame seeds.

Filed under Side Dishes, Vegan, Vegetarian