I have dozens of pictures on my desktop of dishes I that have created and never gotten around to posting. Rice pudding is a comfort dessert in our house. When one of my girls has had a rough day they ask for rice pudding. Over the years, I have made many variations—1, 2, 3, 4, 5, 6, 7, 8, 9, and 10. I had bought some shredded coconut for another dish, but when it came time to use it I was not able to find where I had put it away. Having found it I decided to use it in a rice pudding. 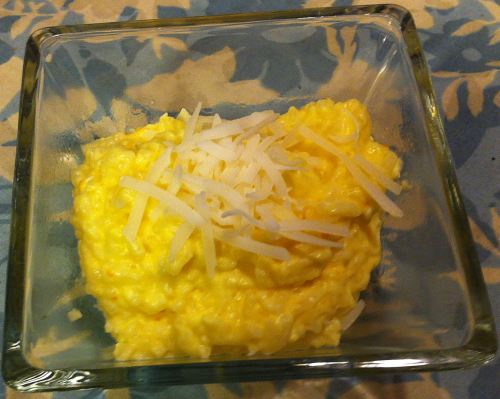 2 eggs, beaten
½ cup half and half

1. Put the rice in a rice steamer with two cups of water and cook until done.

Tip: If you do not have a rice steamer, you may use a pot to cook your rice. However if you make rice more than twice  a month it is really worth the connivance—set it and forget it. You may buy a small one for less than $20.

Note: This is more than the usual amount of water, but you want the rice to be a bit overcooked. This makes for a creamer final pudding.

2. While the rice is cooking, put the eggs into a large measuring cup and beat them well.

Tip: You need enough room in the measuring cup to hold some of the hot rice as you “temper” the egg mixture (see below).

3. Blend the half cup of cream into the eggs and set the mixture aside.

4. Put the two cups milk, the coconut, and salt into a medium saucepan and bring it to a simmer.

5. Stir in the cooked rice and simmer, over medium low heat, until thickened, about 15-20 minutes.

Tip: Stir constantly and scrape the bottom of the pot to prevent scorching.

Note: Rough handling releases more of the starch from the rice and also makes for a creamer rice pudding.

6. Spoon some of the hot rice into the egg/milk mixture to temper it.

Tip: You want your eggs to turn into a custard, not scrambled eggs.

Note: I mix the eggs in a 2 cup measuring cup and then add a few tablespoons of hot rice at a time, mixing it in, before adding a few more for a total of about ¾ of a cup.

7. Stir the warmed egg mixture into the rice in the pot.

8. Continue cook, stirring roughly and constantly, for 8-10 more minutes, until thick and creamy.

9. Remove the pot from the heat, and stir in the butter and vanilla.

10. Serve warm in individual bowls with sprinkle of coconut on top.