The May/June issue of Cook’s Illustrated had an article about Dutch babies. In modern recipes, this is a spectacular large pancake with a crisp edge and a custardy center. I pared down the original recipe to make enough for three hungry people and added a few twists of my own. I have made this dish several times, but I have yet to get the ideal Dutch baby—the flaring edges should be fairly evenly raised all around the pancake—mine tended to end up lopsided. Still the flavor and texture are exceptional. Dutch babies are frequently topped with lemon and powdered sugar or fruit compote. 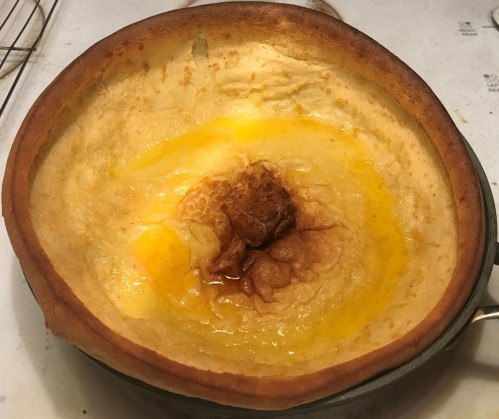 Update Note: I have changed the photo in this post. I have finally succeeded in making a Dutch Baby that came out as it was supposed to—the edges raising equally all around the rim. The secrets were to use a smooth sided pan—I found that cast iron tended to be too rough along the sides—using lots of butter, and finally spreading the butter over the top edges of the pan. You want there to be nothing to catch or hinder the rising crust, as it pushes out of the pan.

This recipe is easily scalable to the number of people you wish to feed. I have discovered that I can prepare the various ingredients for the Dutch baby the night before, so that it only takes a minute or two to get this dish into the oven. This makes it ideal for when you have company—you can pop it in the oven and chat with your guests until it is done.

Note: The night before, I measure the dry ingredients into a bowl and the eggs, vanilla and milk into a lidded pint jar. I also chop up an apple and add the rest of the fruit compote ingredients into a second pint jar. In the morning, I whisk the wet and dry ingredients together, pour the batter into the pan and pop it into a cold oven. The apple mixture gets poured into a small pot over medium heat, to simmer while the Dutch baby cooks.

Note: The first column is my recipe to feed three. The second column is the amount to add per person to feed more or to subtract for less.

A low-sided oven-safe pan—large enough so that when the batter is put into it there is no more than one inch of the pan lip showing, but no less than half an inch.

1. Measure the flour, sugar, salt and nutmeg into a medium bowl and shift or whisk to combine.

Note: Do not preheat your oven! Even if you are assembling and baking your Dutch baby just before serving, you still want to put it into a cold oven to start.

2. Add the three eggs to a lidded pint jar.

Tip: Seal the jar and shake well to scramble the eggs.

Note: I am writing these directions for preparing your ingredients the night before.  If you are assembling your Dutch baby just before you plan to cook, you may use a small bowl for mixing the wet ingredients and add them directly to the dry ingredients. Also—if you are making enough for more than three people—you may need to use quart jars.

3. Add the milk and vanilla to the jar, put on the lid, and shake well to mix.

Tip: Put the sealed jar in the refrigerator until morning.

Note: The flour mixture may simply be left on the counter overnight.

4. Core, peel and chop the apple into small bits.

Note: Amounts for the compote may be doubled or tripled to feed more.

5. Put the chopped apple into a second lidded pint jar.

Tip: If you are making your compote in the morning, you may simply put all of the ingredients directly into a small pot. However if you do this, melt one tablespoon of butter in the pot before adding the apples.

7. Seal, shake the jar well, and place it into the refrigerator overnight.

Tip: The lemon juice prevents any bits of apple that are above the jar’s liquid level from turning brown.

8. In the morning, melt three tablespoons of butter in a large sauté or cast iron pan.

Tip: Do not over-heat your pan, you want to heat the pan just enough to melt the butter.

9. Brush the melted butter all over the edges of the pan.

Note: The batter around the edge of the Dutch baby cooks slightly faster than the batter in the middle. As it cooks the egg batter along the edge will expand and—if the edges of the pan are well greased—it will rise up. Below this ring, more batter will fill in the space and start to cook faster than the center. This ring will expand, pushing the first ring higher. This pattern will continue to happen and—if works properly—you may have as much as a 4-5 inch high crisp ring all around your Dutch baby. In four attempts, I have yet to achieve this goal. One important lesson I have learned is that you want to use a fairly shallow pan—the uncooked batter should be within ½ to 1 inch of the lip of the pan. A high sided pan over-cooks the edge and stops the edge from expanding.

10. Pour ⅔ of the egg mixture into the dry ingredients and whisk until smooth.

Tip: You want absolutely no lumps in your egg batter.

Note: Do not be concerned about creating gluten while whisking your batter. A bit of gluten is necessary for the formation of the Dutch baby’s raised edge.

11. Add the remaining liquid to the batter and whisk it in.

12. Pour the batter into the pan and place it into the cold oven.

15. As soon as you have placed the Dutch baby into the oven, melt the remaining tablespoon of butter in a small pot.

16. Pour the contents of the apple jar into the pot and bring it to a boil.

17. Reduce the heat and simmer over a low heat until the apples are tender and the Dutch baby is done.

Tip: Stir the apples occasionally and add more water or brandy, if necessary.

Note: The liquid in the pot should be reduced to a thick caramel glaze, but not scorched.

18. After 30 minutes, check the Dutch baby for doneness.

Tip: The center should be fairly firm with no more than a little jiggle when shaken.

Note: If the center of the Dutch baby is still very loose, continue baking for another 5-8 minutes.

19. Remove the Dutch baby from the oven and transfer it to a wire rack to cool for 5 minutes.

20. Transfer the Dutch baby to a large serving plate or cut it into individual pieces.

21. Spoon the caramelize apples into the center of the uncut Dutch baby or over the individual pieces and serve.