Adapted from a Travel Gourmand recipe

Tuile—French for a curved roof tile and pronounced tweel—is a thin, crisp, and curved cookie, frequently used to garnish desserts. Wife Jan is making chocolate mousse for my birthday and asked me to make some tuile to add to the dish. Although, I have watched them being made—we hosted a French family and the father made some while they were here—I have never tried my hand at them. 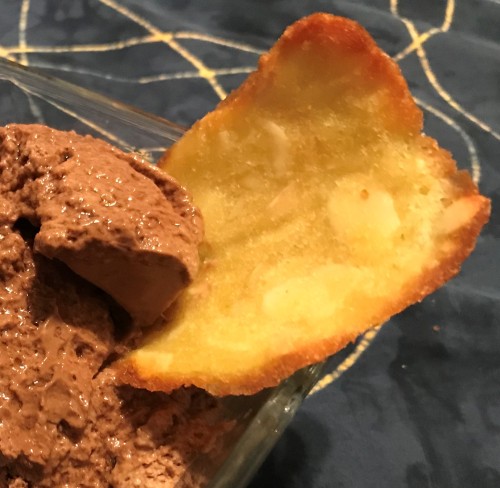 3. Whisk together the egg whites, sugar and in a medium bowl until foaming.

4.  Blend in the flour, butter, and almonds.

Tip: The batter should be very loose.

Note: The original recipe called for only two egg whites, but I found the batter too thick to spread easily.

5. Scoop about a half tablespoon of batter onto the parchment paper and spread it into a thin round.

Tip: You want to use at least two cookie sheets for this process. Trying to spread the dough onto an even slightly warm sheet will cause the batter to start cooking and make it hard to spread.

Note: I placed six cookies on the try at a time, because the original recipe said to leave 4 inches between cookies, because they would spread a lot. I did not find this to be the case.

6. Bake each sheet for 8 to 10 minutes, until the tuile are lightly browned.

7. Remove the tuile from the tray—while they are still warm—and drape them over a small jar or a large rolling pin to cool.

Tip: I found that the traditional wine bottle—used to bend the tuile—did not create much of a curve on the cookies; you want to use something small.

Note: You may also roll the tuile into cones or tubes, if you wish. If your tuile has gotten too cool to bend without breaking, you may return them to the oven for 30-40 seconds to soften them up again.

8. Store the tuile in an airtight container.

Tip: The sugar in the tuile will attract moisture and this will turn the crisp cookie chewy very quickly.

Note: While all of the recipes I found stop here, our visiting French friend baked the tuile a second time. After the first bake, bending, and letting the tuile cool completely, he then returned them to a 200° F oven for another 5-10 minutes, so that they were completely dry and crisped.