I overslept today, so Jan invaded my kitchen. Jan loves to tweak her anthropology student’s by telling them that the kitchen in our house is a very gendered space. They all go “yeah, yeah, of course that’s right.” Then she drops the punch line, “No Women Allowed!” 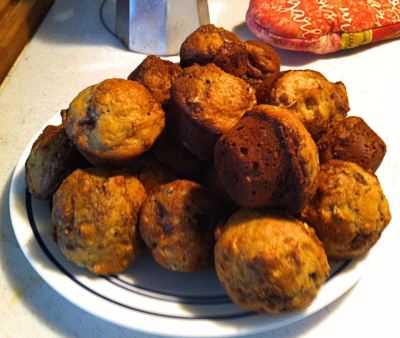 This morning Jan had a hankering for Schat’s Bakery Cinnamon twists. Jan’s parents were living in Lone Pine when she was born and she has taken many field classes through Eastern California, so Schat’s has a very special place in her heart. It is not the gooey sweetness she misses, but the bite of the amount of cinnamon that they use. Most bakeries and recipes are very shy in their use of cinnamon.   Jan wanted the spicy heat of the cinnamon, but she did not want it to be drowned out by the sugar. She also wanted to make it healthier, but still to be like muffin Red Hots.

Jan looked at three recipes and followed none of them, partly because she is lost in my kitchen.  She couldn’t find my rolled oats, but she realized that muesli was mostly oats. She has almost religious reasons for not using white sugar (white death), so she used brown sugar. She also prefers to use melted butter, over oil, as her shortening. We don’t have buttermilk as a staple in my kitchen, so she mixed milk and yogurt to fill the bill. She wanted a rich cinnamon vein running through the muffins, so she invented her own way of swirling it in.

1. Sift together the flour, baking soda and salt into a large bowl.

2. Stir in the museli and brown sugar.

3. Make a well in the dry ingredients and add the egg, milk, yogurt, and slightly cooled melted butter. Mix well until fully incorporated.

4. Mix the cinnamon and brown sugar in a small bowl.

5. Pour half of the cinnamon mix over the batter and gently fold it in. You are not trying to mix it in completely, you want there to be streaks of cinnamon throughout the batter.

6. Fill each cup of the mini-muffin tray to the top.

Note: You could use a regular muffin try if you prefer, just bake is a little longer. We use mini-muffins for portion control, three small muffins is so much less that one big one.

7. Place a bit of cinnamon mix on top of each muffin. Use a butter knife to press the sugar into the muffin and then give it a twist as you remove it. The idea is to give each muffin a good rich strip of cinnamon sugar running through the muffins. Use your fingers to scrape the batter on the knife back into the muffin tin before moving on to the next.

8. Sprinkle the tops with the remaining cinnamon sugar.