In the 1970’s I was working for a diving company based in Belle Chasse, LA. I have been thinking about that time lately (it probably has something to do with Lent and Mardi Gras). I can’t think about N’Orl’ns (one word) without thinking about the food. For two years I lived off of Muffulettas, Shrimp Etouffee, boiled crawfish, and Jambalaya.  I have had a sudden desire for the flavor. Louisiana food generally falls into two main cuisines Creole and Cajun, which roughly corresponds to city and country. 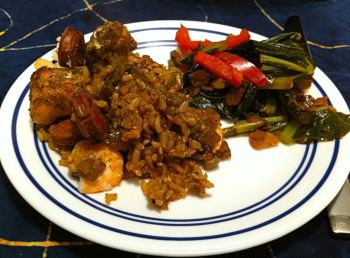 Creole are the descendants of the original Spanish and French settlers of New Orleans in the 1600’s. Their cuisine was influenced by close contact with the African food traditions of the slaves. The French Acadians settled in the countryside around New Orleans, after they were forced out of Canada by the British in the late 1700’s. They became the Cajuns and their food was influenced by the Native Americans living in the region. Both cuisines are primarily French and use the “holy trinity,” a sofrito of onions, green bell peppers and celery. The usual ration for these ingredients is 2:1:1.  The primary difference between a Creole and Cajun Jambalaya though is tomatoes. If you add tomatoes it is Creole.

After we came back from China, the first time we were in the habit of eating much more garlic than the average American. Where an East Coast or British person might wipe a sliced clove of garlic around the inside of a bowl and an average Californian might use one clove of garlic, we use ten.  When we first arrived in China, I was frequently laughed at in the free market for buying only a single bulb of garlic.  In Sichuan, who would by less garlic than a jin (1.1 pounds)? Now a lot of garlic just make it taste right. One problem is that weather you are pressing or mincing garlic fine it takes a lot of time and effort.

The solution to this problem came in the form of a gift from my little sister. (She is over fifty now, but I still think of her that way. Yes, I know she hates that.) One birthday she sent me a new fangled garlic press. The usual garlic presses look like small orange squeezers. They are hard to use and impossible to clean. The Joseph Joseph Rocker Garlic Crusher, looks like a little boat with holes in the bottom. You the Crusher down on the clove and you press down on both sides. The crushed garlic collects in the boat and you can press ten cloves of garlic in 20 seconds. It is also easy to clean, because there are no moving parts. I love this thing and use it frequently, thinking of Grace each time.

Joseph Joseph
Rocker Garlic Crusher
(No, that is not a mistake)

Tip: Get the stainless steel one.

1. In a medium pot, put the shrimp for in 1 cup of boiling water for 30 seconds (until the shell are just pink.  Remove the shrimp to a bowl of ice water. Do not discard the water in the pot!

2.  Peal the shrimp and return the shells to the pot and continue boiling for 5 minutes. Strain and reserve the fluid and the shrimp, separately.

3. In a large Dutch oven, sauté the Andouille in the butter until the slices just start to pick up some color, about 2-3 minutes.  Remove the sausage to a bowl.

Tip: Before you slice the sausage make a score down its length to break the casing. If the casing is intact, the slices will poof-up into little hats as the casing shrinks during frying.

4. Without cleaning the Dutch oven, brown the chicken pieces over a high heat. (Add extra butter if necessary.) You are not trying to cook the pieces all the way through, just get a good brown on a side or two. Remove the chicken pieces to the bowl when done.

5. Without cleaning the Dutch oven, add the onions and sauté for three minutes, until it is just translucent.

7. Pull the vegetables to the sides of the Dutch oven and add the Cajun spice blend to the open space and heat it for 10-20 seconds.  Add the Shrimp water and scrape the fond off the bottom of the Dutch oven.

Note: I used 4 tablespoons of Karl’s Cajun Spice Blend and it was very intense (read HOT!). I personally thought it was a bit much, but the consensus of the table was that it was perfect and couldn’t really call itself Cajun if it was milder.

Tip: Turn the fan on and hold your breath while “blooming” the spice. It can be an intense experience to get a lung full of the volatiles coming out of the pot.

8. Return the contents of the bowl to the Dutch oven and add the rice, chicken broth and salt. Stir briefly to mix, but do not stir after this point. (Do not add the shrimp at this time.)

Alternative: Simmer on the stove top on low.

10. When the rice is almost ready, add the shrimp by poking some of them down into the Jambalaya and arranging the rest decoratively over the top.  Cover and let stand for 10 to 15 minutes off the heat.