Steamed fish is something we had many times while we were in Chengdu, Sichuan, and in Hong Kong. It is actually a fairly simple recipe. I reconstructed it and I have continued to make it since we come back. 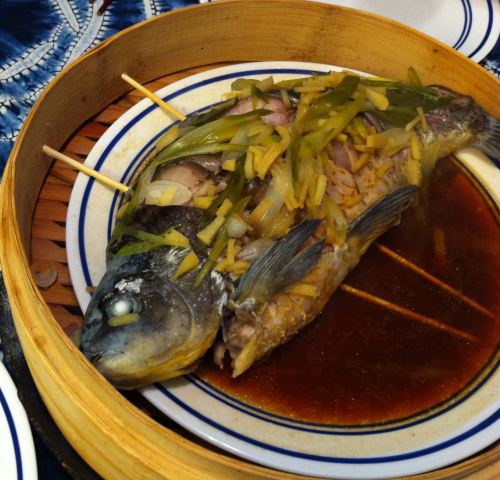 The other main dish I am making today, dong quai chicken, is a woman’s dish. Men are really not supposed to eat this dish. Chris has been asking for a steamed fish, so I am making this for the men at the table.

There are several Chinese traditions that go with this dish. First, while you gut and scale the fish, you do not cut off the head and tail. I greatly upset a Chinese friend with whom I was making a meal, when I cut off the head and tail when I was cleaning the fish for dinner. A whole fish is a “swimming fish” and that is a homophone in Chinese for “have an abundance of everything.” A whole steamed fish is a “good luck” dish for a New Year’s meal.

This same Chinese friend told us that after you had eaten the top half of the steamed fish you never turn the fish over to eat the other side. He explained the Chinese traditional belief was that doing so would cause the fishing boats in the South China Sea to flip over. To get to the meat on the other side of the steamed fish, you simply break the spine near the tail and lift the spine up and out. Pulling the spine towards the head exposes the rest of the meat to your hungry diners. 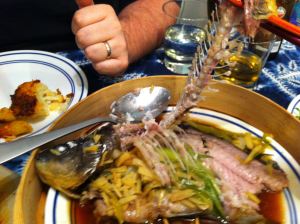 A third tradition is that if you have a guest at the table you always point the head of the fish in their direction. One reason is that the best bits of the fish are at that end. A second reason is that you are giving them your “luck.” The “luck” flows in the direction that the fish “swims.” While this idea may seem strange to Westerners, who believe in “luck.” Why would you ever give away your “luck?” In this case, when you give your guest your “luck” you are placing them in guanxi debt to you.

In China there is a secondary economy of guanxi. This was especially true in the 1980’s when there was very little money in the “first” economy. Guanxi is an interlocking system of favors, kind of like the Godfather, between people in your social network. If you are in guanxi debt to someone it is hard to refuse when they come asking for a favor.

It is difficult for a Westerner to understand the ubiquity of guanxi in China. An official may build a guanxi debt simply by doing their job efficiently, but every family is constantly on the lookout to put other people in their debt. Doing “favors” for anyone that they may need to do them a “favor” at sometime in the future.

While the favor asked for may be as big as getting your child an “in” on a government job, most of the time it is little things. Where is the secret source for the best rice? Where can you find an electronic device at the best price? Or even, can you watch my child while I go shopping? Everyone, especially the wives, knows what is owed to them and what they owe to each family in their network.

After Dinner Note: Every dish in this dinner worked well. The girls loved the chicken, the boys (and Eilene) loved the fish and everybody loved the cauliflower and cucumbers. 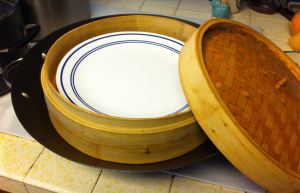 1. Have the fishmonger, gut and scale the fish. Make sure that they do not cut off the head or tail.

Tip: You may do this yourself, but the scales will fly all over your kitchen.

2. Cut 2-3 diagonial slashes across the thickest part of the fish on both sides.

Tip: These cuts allow the thick parts of the fish to cook more evenly with the thin tail.

4. Lay the fish on the plate and rub the sauce all over the fish, inside and out.

Tip: One of the sites I looked at suggested putting skewers under the fish. This would let the steam reach the underside of the fish while steaming. It seemed like a good idea.

5. Slice the green onions on a long bias and cut the ginger into match sticks.

6. Put a few of the green onion top slices into ice water. After a bit they will curl up to make a decorative garnish.

7. Take half of the remaining onion and ginger and put it inside the cavity of the fish.

8. Scatter the remaining ingredients over the top of the fish.

9. Put a few inches of water in the wok and lay the steamer basked above the water.

10. Put the plate in the basket and put the cover on the steamer.

Tip: I leave the plate in the steamer and serve the whole thing covered until the diners are ready to start eating. Cook the fish one minute less if your do this, so that it does not overcook.