Adapted from Djurenko.com and 17recipes.com

Georgian Shilaplavi is a rice dish that is described as being like a risotto. I have some diners who prefer little or no starch. I have learned that cauliflower is a versatile and good substitute. It is filling and can be “manipulated” in a number of ways to imitate some starch ingredients. 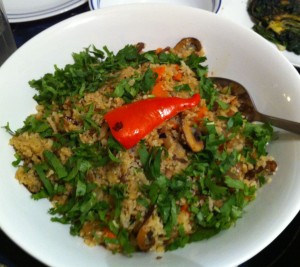 As I was searching the internet I found a recipe for cauliflower “rice.” You grate the cauliflower into rice grain sized bits and, if you do not overcook it, this mock rice makes a decent stand in for real rice.

Georgian Shilapalavi calls for one thing this mock rice will not do. If you cook rice properly is releases some of its starch to make a creamy sauce.  Cauliflower has no starch to release. A common ingredient in Georgian cooking is matsoni, a thin mildly tart yogurt. I thought that this might stand in for the creamy texture that was missing.

Since I do not have a source for matsoni I decided to make my own. I took some “live” Greek yogurt and added some cream and milk. Letting this mixture sit at room temperature for a few hours and it ferments into a “thin mildly tart yogurt.”  Since I have never had matsoni, I do not know if it tastes anything like the original, but it will have to do.

I have substituted almost every ingredient in the original recipe, but the spirit of the dish will be Georgian.

1. Mix the milk, yogurt and cream in a bowl and let it sit at room temperature for at least three hours.

Tip: The longer the better.

Tip: Rotate the solid stem pieces constantly as you are grating. You want little “grains of rice” not long strings of vegetable.

3. Melt the butter in a sauté pan and sauté the mushrooms, over medium high heat, until well browned. Remove the mushrooms to a bowl.

4. Without cleaning the pan, add the onions and a pinch of salt. Sauté until just starting to pick up some color.

5. Add the carrot to the pan and continue cooking for three more minutes.

7. Add the chili, cumin, and pepper. Cook stirring for 30 seconds.

8. Add the cauliflower rice to the pan.

9. Return the mushrooms to the pan and add the chicken broth. Cover and cook over a low heat for 5-7 minutes.

10. Remove the lid and let most of the pan liquid boil away.

11. Remove the pan from the heat and let it cool slightly.

12. “Temper” the yogurt and then stir it in into the rice.

Tip: To “temper” yogurt means that you take a couple of tablespoons of the rice mixture and mix it into the yogurt. This gradual warming prevents the yogurt from curdling when you stir it into the hot vegetables in the pan.