Turkey Mulligatawny is a childhood memory. Every year, that I can remember, my mother, Claudia, would make it with the carcass of the Thanksgiving turkey. It is, however, as Indian as chop suey is Chinese. Simply, not something a native cook would make. 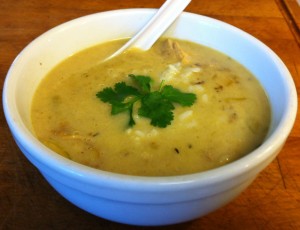 I do not know which recipe my mother used, but for years I have been basing mine on the one in Joy of Cooking.  Since this was a constant feature of her kitchen, I suspect she used the same one.

The recipe in Joy of Cooking has minimalist instructions. It assumes that the cook knows a lot of techniques that are not stated. One of the goals of my blog is not to assume this knowledge.

A second point of this blog is to discover and clarify “hidden” ethnic knowledge. Things that are considered so obvious to native cooks that they would never think to mention it, because “everybody knows that.” The Joy of cooking recipe calls for using a bay leaf. I know in the past I, like most American cooks, went to my spice cabinet and took out a Turkish bay leaf and added it to the soup pot.

In September I posted a recipe for Garam Masala. Recently, I was contacted by JMK about the difference between Indian bay leaves and Western bay leaves. This is a perfect example of “hidden” ethnic knowledge.

Most frequently a problem will be that the same plane or spice will have many different names in different cultures. The problem with “bay leaf” is that there are actually three very different plants with the same common name. Indian bay leaf (Cinnamomum tamala) is not the same as Bay laurel (Laurus nobilis) or California bay leaf (Umbellularia californica).

Indian recipes that call for “bay leaves” do not want the piney flavor infused by the other two plants. Indian bay leaf imparts a deep cinnamon note to a dish. I thank JMK for passing on this information and I have amended my recipe with this change.

I do not know if the authors of the Joy of Cooking are aware of this difference, but I am sure that thousands of American cooks, like me, have been using the wrong leaves for decades. I made a special trip to my local Indian supermarket to buy the correct leaves for this recipe.

1. Break the turkey carcass up into sever pieces and add water to cover in a large soup pot.

Tip: If you wish, you can trim as much of the meat from the bones and reserve it so that it does not overcook.

2. Peel, core and chop one of the apples and add it to the pot.

Note: If you do not already have cooked rice on hand, use this time to make about a cup of cooked rice (long grain or basamanti). Many recipes call for the rice to be added directly to the soup near the end of cooking. I have several diners who are controlling their starch intake, so I serve it on the side, to be added as desired, at the table.

4. When the meat is falling away from the bones, remove the carcass and let it cool.

5. Strain the broth through a sieve and reserve.

Tip: Use a spoon to press the apple bits through the sieve.

6. When the bones are cool enough to handle, strip any remaining meat from the carcass and reserve.

7. Wash the soup pot and add the butter. Set the heat to medium high.

8. When the butter has stopped foaming, add the onions, carrots, celery and cabbage. Cook the vegetables until they are soft and translucent, but not starting to brown.

11. Add the reserved broth, the second apple and the Indian bay leaf to the pot and cover the pot. Simmer for 20 minutes.

12. Stir in the reserved meat and simmer five minutes more.

13. Blend in the cream and coconut milk and simmer one minute more.

Note: If you use too much coconut milk, it over powers the rest of the flavors. I have found that a little coconut milk and cream give you the richness and a more balanced flavor.

14. Garnish with cilantro and serve with rice on the side.

One response to “Karl’s Turkey Mulligatawny”