I have never been overly fond of corned beef and cabbage, but like most part Irish-Americans I have usually made it on St. Patrick’s Day.  Part of the reason for this dislike was because, like most Americans, I would go to Safeway and buy the plastic package of bright red meat. This sour meat would be tossed in the pot with potatoes, carrots and cabbage to be boiled to death. 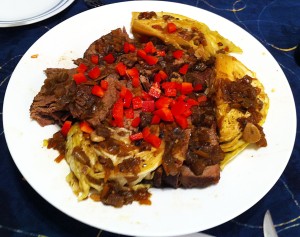 This year, I decided that I would try Whole Foods corned beef for a change. This beef was not the bright red of “red dye no. 5,” but a rich brown. It was also sold covered with lots of whole pickling spices. This was definitely not what I was used to and made me think about what other changes I could make.

In looking at recipes for corned beef and cabbage, the cooking times are all over the map. Some call for cooking everything in only an hour and a half. Others insist that nothing under 10 hours of cooking will do. In my experience brisket, the usual beef cut for corned beef, takes a long time to become tender. So my second decision was that a longer cooking time would be vital to a good corned beef.

The problem with this choice was that any vegetables added at the beginning would be cooked to sludge. This led to my third decision; I would not cook everything in one pot. I know that my son-in-law, Chris—being from Boston—is a big fan of “New England boiled dinner,” but I am not. It was time for some deconstruction. I first moved the potatoes and most of the cabbage to a separate side dish, colcannon.

Boosting the flavor of the sauce was my next consideration. A bit of bacon grease would give the sauce a smoky start. Some aromatics; onion, celery, carrots and garlic seemed like good choices. The corned beef already had a lot of spices covering the meat, so I thought that much more would not be necessary, but more pepper and a bay leaf called to be added.

My next decision was to grate the carrots. While over-cooked carrots give a sauce a nice flavor, their mushy texture leaves a lot to be desired. The grated carrots would break down completely into another element of the sauce without the unpleasant slimy mouth feel.

While most recipes call for boiling the corned beef, this prevents the flavor boosting Maillard reaction from occurring. Braising would allow the top of the meat to brown and enhance the sauce’s flavor. I decide to only add enough liquid to partly cover the meat.

Cooking with Irish whiskey might just be a capital crime in Ireland—it would at least be a criminal waste—so that was right out. Guinness, on the other hand, is already considered a food, rather than a drink, by the Irish. It has a robust flavor all by itself and it would make a good start to a rich sauce. One can of Guinness and enough beef broth to come half way up the side of the corned beef should be about the right amount of liquid.

My final decision was to add some of the cabbage in at the very end of the cook process. Chris is still on his ketogenic diet, so he would not want to eat too much of the starchy colcannon.  This cabbage would pick up the flavors of the corned beef sauce, but would only be cooked al dente. Everyone should get enough to eat and everyone will be happy.

After Dinner Note: This was a very successful meal. Everyone raved how good this was, not just once, but almost with every bite. The beef was tender and spicy, without being sour. The cabbage was perfectly done and the sauce was robust and flavorful. Everyone had seconds, if not thirds.

Note: You should plan to cook your corned beef for at least six hours, eight is better and ten is best). Plan to start cooking early to mid morning of the day you plan to serve your meal.

1. Melt the bacon grease in a large Dutch oven and sauté the onions and salt until just starting to pick up some color, about eight minutes.

2. Add the celery and carrots and continue sautéing for 5 more minutes.

4. Stir in the pepper, bay leaf, Guinness, and beef broth.

5. Nestle the corned beef into the braising liquid, fat cap up.

Tip: If necessary, add more beef broth to bring the liquid level up to the middle of the meat. Bring the pot to a boil and the lid on the Dutch oven.

Tip: While many cooks prefer to cook braises on the stove top, my personal preference is for the steady and surrounding heat of an oven.

Note: Many times when I use a Dutch oven I add a sheet of aluminum foil to prevent the loss of the cooking liquid to evaporation. In this case, I want my sauce to reduce to a thicker, richer sauce.

7. About half way through the cooking time, turn the meat over and return the pot to the oven.

Tip: Be careful while turning the meat, as it will be close to falling apart tender. This turn brings the browned bits on the top of the meat into the liquid. The fond will dissolve into the sauce creating a richer flavor. Also, the part of the meat that was submerged is now exposed and gets a chance to brown.

8. About 40 minutes before dinner, remove the corned beef from the pot and wrap it in aluminum foil to keep it warm.

Tip: The meat at this point is fall apart tender, letting it rest and cool makes it easier to slice.

Tip: Ladle the grease floating on top of the pot sauce into a fat separator.

10. Cut the cabbage into large slices and tie them with a bit of string.

Tip: Leave the core in the cabbage and wrap and tie some string around each slice of cabbage. The string keeps the slices intact while you are cooking them. Remove the string just before serving.

11. Add the cabbage slices to the sauce and cook them, covered, for 20 minutes. If necessary, flip the slices half way through cooking.

Tip: You can return the Dutch oven to the oven or finish cooking the cabbage on the stove.

Note: The liquid in the pot will be fairly shallow by this point. Flipping the cabbage slices allows more of the vegetable to come into contact with the sauce.

12. Slice the corned beef and transfer it to a serving platter.

13. Remove the string from the cabbage slices and arrange them around the corn beef.

14. Pour the pan sauce over the meat and cabbage.

Tip: (optional) If you object to a chunky sauces, you may put the remaining liquid and overcooked vegetables into a standing blender and process it into a smooth sauce.

15, Garnish with the red bell pepper and serve.