Adapted from a Destination Anywhere recipe

It is son-in-law Chris’ birthday week and he has asked for Moroccan. Last year I made an oxtail tajine. He loved it, but it was a bit too oily for Jan. I decided to look for something else Moroccan. 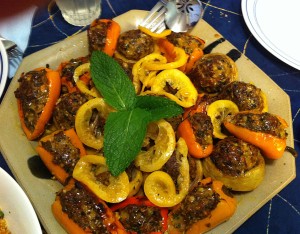 Chris also likes artichokes, so I went looking for a recipe that included them. I came across a Sephardic recipe that looked promising. However, I decided that I would have to make some changes.

The recipe included several anachronisms. While Old World Morocco may have had access to Chinese five spice, they certainly would not have had New World potatoes. Although potatoes make a good “stretcher” for meat, it was clearly non-traditional. Also, Chris is on a ketogenic diet, which means he would not want all that starch.

Since I have taken out most of the fillers from this dish—large amounts of potato and starch—my meat could end up dense and tough. To make it tender, I am adding a bit of baking soda. The soda breaks down the proteins and prevents it from toughing up. However, do not use too much soda or it will make the meat taste “soapy.” If you use this technique, you must also not let the meat sit too long before cooking it—meaning overnight—the soda will continue breaking the proteins down and you will end up with a bag of mush.

The more common spicing for Moroccan food would be a Ras el Hanout—the “head of the shop.” The use of Five Spice, in the original recipe, strikes me as a substitute for this uncommon (in the West) spice blend. The recipe for this blend varies between each spice shop that sells it, but it is suppose to be the best blend that the shop can produce. While I have made my own blend, Jan has bought me a Ras el Hanout from Whole Spice in Sanoma.

One thing Amy’s discussion did tell me was that Middle Eastern markets sell frozen artichoke hearts. One of the biggest drudgeries of making stuffed artichokes is the labor of trimming and cleaning all of these hearts. This is one short cut that I was quite happy to take.

Another idea I borrowed was to use some of the meat to stuff some sweet peppers. I know that I did not want to stuff large bell peppers, but at the same market they had bags on small sweet peppers (about the size of jalapeños). While Amy only discusses them in passing, her pictures tell me that these are the same ones she uses.

To go with my stuffed vegetables I am also making Moroccan salad and a Moroccan couscous salad. For dessert, Jan is making Chris a chocolate brownie cake.

After Dinner Note: While the stuffed vegetables and brownie cake were big successes, the salads left something to be desired. This is a cautionary tale about not spending so much time thinking about the recipes that you end up with too little time to actually make them.

2. Dissolve the baking soda in the warm water and add it to the bowl.

Tip: The warm water insures an even distribution of the baking soda. It also helps to warm the lamb fat a bit making the meat easier to mix.

3. Use your (clean) hands to mix the ingredients in the bowl well.

4. Refrigerate the mixture for about 15 minutes.

5. In a small dry pan, toast the saffron for 10 seconds over medium heat.

6. Add the black pepper, lemon juice, olive oil and water to the pan.

7. Stir to combine and remove the pan from the heat. Let this mixture rest for 10 minutes.

Tip: Make one cut near the stem of the pepper about half way through. Make a second cut from the stem to the point of the pepper. Pull the resulting flaps back to remove the seeds and veins from the peppers. Be careful not to rip the peppers in two, as you try to de-deed them.

10. In a large baking pan, arrange thinly sliced lemons to cover most of the pan.

11. Place the artichokes on top of the lemon slices.

Tip: In addition to adding to the pan sauce, the lemon slices help to stabilize the artichoke hearts. You may still need to trim just a bit more off the bottoms to get them to stay upright.

12. Make meatballs large enough to fit snugly into the artichokes, and press one into each artichoke heart.

13. Stuff any remaining meat into the peppers and distribute them between the artichokes in the pan.

14. Gently ladle the saffron mixture over the artichokes and peppers.

15. Cover with the baking pan with foil.

17. Remove the foil and use a turkey baster to transfer most of the liquid that has collected in the pan to a small pot.

18. Turn the oven to broil and increase the temperature to high. Broil for 10 minutes, until the tops are slightly browned.

19. While the vegetables are broiling, reduce the pan liquids by two thirds on the stove, until well thickened.

20. Transfer the vegetables to a serving platter.

21. Pour any remaining pan liquids into the pot and ladle the sauce over the meat and vegetables.

22. Garnish the plate with the cooked lemons and fresh mint leaves and serve immediately.

One response to “Karl’s Moroccan Lamb Stuffed Artichokes and Peppers”