I made corn chowder earlier this week, but Jan suggested that crawdaddy chowder was what Miriam needed—she is feeling sick from the medicine she is taking. She needs high fat and starches to settle the nausea. A bit of spice to cover the metallic taste in her mouth would also be nice. 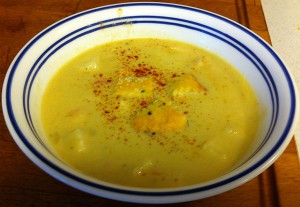 A key ingredient to this dish is the crawfish and boil that I buy from Crawddadies. While they claim to be Cajun, I never had anything like this when I lived in Louisiana. The spicing for their boil comes more from Vietnam than the bayou. It comes in mild, medium, hot, and fire—we once bought the hot and it raised blisters. While we can tolerate a fair amount of heat, I usually get mild or medium.

One day I will have to deconstruct their recipe, so I can start by boiling my own crawdads. Ingredients that I have identified so far are massive amounts of garlic, bay leaf, and some kind of chili oil—maybe Vietnamese, but not like any I ever had in New Orleans.

One pound of crawdads turns into only about a quarter pound of meat. The rest is inedible shell. At 12 dollars a pound it would costs a lot to feed a family of five. My solution is to only buy a pound or two of crawdads and to extend them with langoustine.

I normally use these crawfish to make corn chowder. Chris, though, is on a diet that excludes as much starch as he can avoid. To please everyone, I have to drastically alter my recipe and replace the corn and potato with other less starchy vegetables.

To provide the starches for Miriam, I am also making fresh crackers on the side. For Jan, who will have problems if she eats too much of the rich soup, I am making a vegetable vinaigrette. This way everyone gets to be full and happy.

1. Remove the meat from the crawfish and the larger claws. Reserve the meat and the boil that comes with them.

Note: I start this recipe with a takeout order of crawdads from a local restaurant. You may also use fresh crawdads that you boil yourself, but that is a recipe in itself.

2. Place the heads and shells in a soup pot and add the chicken stock and the boil. Bring the pot to a boil, reduce the heat, cover and simmer for 15 minutes.

3. Strain the stock and reserve it in a bowl.

Tip: A lot of the liquid will get trapped in the heads, so when they are cool enough to handle drain them individually. Pick out as much of the garlic as you can, it will be mixed in with a lot of little bits of shell.

4. Rinse the pot and melt butter over a medium high heat. Sauté the onions until they are translucent, about five minutes.

Note: I usually make my dishes with less fat than this, because Jan has problems with digesting too much oil (problems with her gall bladder or rather lack of one). Today I am making a more tradition version—I have seen Cajun chef Paul Prudhomme use a full pound of butter for a dish like this. My soup turned out very taste, but it was not really a health food.

5. Add the celery, leeks and cauliflower, sauté for eight more minutes until the vegetables are softened.

6. Pull the vegetables to the sides of the pot and add the chopped garlic to the hole in the center. Sauté the garlic until it is fragrant, about one minute, and then stir in the vegetables.

7. Add the bay leaf, marjoram, cayenne, pepper and reserved stock. Bring the pot to a boil, cover, reduce heat and cook until the vegetables are very soft, 15-20 minutes.

8. Remove the soup from the heat and cool slightly. Briefly process the soup in a standing blender until smooth.

Tip: If you prefer a more rustic chunky soup, use a potato masher or immersion blender to partial break up the vegetables.

9. Return the soup to the pot and add the daikon. Simmer the soup for 10 minutes, until

10. Add the langoustine and simmer for five minutes more.

Tip: You want the daikon soft, but not mushy.

11. Add the cream and continue heating, stirring, until heated through, 2-4 minutes.

Tip: Once you add the cream you want to bring the soup up to serving temperature, but you do not want the pot to come to a boil.

12. Serve in individual bowls, with a garnish of a sprinkle of paprika and a few fresh crackers.

2 responses to “Karl’s Chowder with Crawfish and Langoustine”