Adapted from a Leite’s Culinaria recipe

Most of the people of Portuguese ancestry in San Jose actually come from the Azores. Although many families have been here for more than one hundred years, they still maintain a strong sense of cultural identity and family ties to the home islands. If they have room in their yard for a garden, you may be sure that kale is growing in there. Caldo Verde, green broth, a kale and potato soup is a staple of Portuguese cuisine. 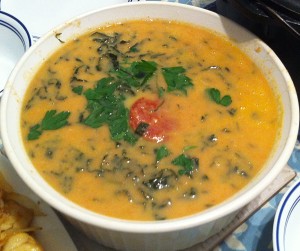 The star of caldo verde is the kale. In the recipes I have looked at they only cook the kale for three to five minutes. In the last kale soup I made, I cut the leaves into half inch strips. Even after 10 minutes of simmering, the kale was still tough and chewy. John Villa gives the secret to avoiding this culinary problem, “What’s crucial when preparing it is that the kale is cut into extremely fine slices; that’s what creates the soup’s distinctive character.”

Chris is still on his ketogenic diet and Jan is limiting her intakes of starches as well. To please them both, I need to find a way to make this distinctive soup without potatoes. Chris introduced me to using diakon as a potato substitute.

Traditionally, this soup calls for some kind of pork sausage. I am using Portuguese chouriço (chorizo in Spanish), but you may use linguiça as well. Portuguese chouriço has a texture of a dry Italian salami. Mexican chorizo is more like loosely ground meat barely held together by a sausage skin. You definitely cannot substitute one for the other. In a pinch, you may substitute a Spanish chorizo—which are smaller and made without wine and garlic like chouriço— but then your dish would not be Portuguese.

I am serving this soup with steamed clams and a salt cod potato casserole.

After Dinner Note: Many of the recipes I post are new to me or I am creating them on the fly and I have never tried them before. Needless to say they do not all turn out perfectly. While usually edible—I don’t post the total failures—they sometimes have a flaw. When I post them I correct anything that made the dish less than perfect.

I had thought that the substitution of diakon, for potatoes, would prevent the soup from thickening properly. That did not turn out to be the problem with using the radish. Potatoes absorb salt—if you have an overly salty soup adding some potato will fix it.  Diakon does not absorb salt, as a result my caldo verde came out tasting just a bit over-salty. The simple fix was to remove the extra salt from the recipe; the chouriço adds enough salt to make the dish perfect.

1. Slice the chouriço into ¼ inch slices.

Note: The chouriço is a sausage about an inch and a half in diameter and half a pound is about four inches in length.

2. Heat the olive oil in a large pot over medium heat. Add the chouriço slices and cook until lightly browned, 3 to 5 minutes.

3. Without cleaning the pot, add the onions and sauté until translucent, about four minutes.

4. Add the garlic and sauté for one minute more.

5. Add the diakon, chicken broth, and one to two cups of water to the pot. Bring the soup to a boil, cover and reduce the heat. Simmer for 30-40 minutes, until the deacon is fully cooked.

6. Remove the pot from the heat and let it cool slightly. Purée the soup until it is smooth using a standing blender—or for a more rustic soup an emersion blender.

Note: According to Leite’s Culinaria, “Here’s where you have to make a decision: Tradition states that one slice and only one slice of chouriço is added to each bowl. Chef Villa likes to add half the sausage slices to the pot before puréeing. It’s your choice.”

7. Return the soup to the pot and bring it back to a boil.

8. Stir in the kale and season with the white pepper. Cover, reduce the heat, and simmer for 2 to 10 minutes.

Tip: Do not just dump the shredded kale into the soup, it will clump up and be hard to serve. Stir in handfuls at a time, so that it is evenly distributed throughout the soup.

Note: How long you cook the kale is a personal choice. Cooked for two minutes and the kale will maintain its bright green color.  If you cook it for ten minutes it will lose some of its color, but the leaves will have a more tender bite.

9. Put the caldo verde into a serving bowl and garnish with some parsley.

10. To serve, put the caldo verde in individual bowls and garnish with a slice of the chouriço.