Jan and Eilene just got back from Hopi. Traveling in Arizona, other than chilies, most places they ate did not use any spices, beyond salt and culinary ash—the additive that turns blue corn meal dishes blue. Now that they are home, they want spicy dishes for dinner. 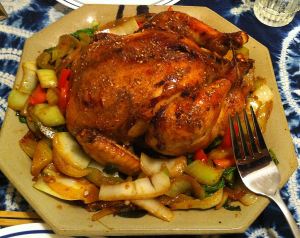 Traditionally, Sichuan chicken is a stir-fried dish. The chicken is cut into small pieces and quickly stir-fried. It is then mixed into quickly stir-fried vegetables and the sauce added at the last minute. This is the most efficient, least energy costing method of cooking. An important consideration when you are cooking billions of meals a day, as in China. Home cooks in China rarely slow roast meats.

One of the things I like to do in my cooking experiments is to mix things up. Take the spices of one country and combine it with the cooking techniques of another. I decided to do Sichuan chicken as a roast chicken on a bed of vegetables, more of an American style Sunday dinner presentation.

My neighbor recently lemon-bombed me and I have a bowl full of lemons to use up. I decided that a Hong Kong/American-Chinese style honey lemon glaze would be a nice finishing tough to this chicken. It is not very Sichuan, but it should be tasty and go well with the Sichuan pepper.

Note: You will not find the kind of lemon chicken you get in American Chinese restaurants in Mainland China—battered and deep fried bits of chicken swimming in a thick lemon and honey sauce. The closest dish in the Mainland would be 陳皮雞 (literally “old peel chicken”), which uses the medicinal ingredient dried orange peels, not the fresh fruit.

After Dinner Note: To go with my chicken, I also served Mapo Doufu and steamed brown rice. The glaze made for a perfect chicken skin—tangy, spicy, and crisp. My dinners left only scraps of the doufu and vegetables and they devoured most of the chicken. What is left will barely be enough to turn into a chicken soup later in the week.

1. Several hours before dinner—preferably the night before—rinse and pat the bird dry. Separate the skin from the breast and thighs.

2. Trim off the first joint of the wings.

Tip: For a Western roast chicken the typical technique would be to fold this joint under the chicken, to keep the wings tight against the bird. In China they always cut the joint off, because you would not want to take the chance that the bird would point accusingly at your dinner guest.

3. Reserve half of the ground Sichuan pepper. Put the rest of the marinade ingredients in a small bowl and mix them well. Remove and reserve two tablespoons of the mixture for the sauce.

4. Smear the remaining marinade inside the cavity, under and over the skin of the chicken.

5. Put the bird in a gallon plastic bag and refrigerate for at least three hours.

6. Three hours before dinner, set the bagged bird on the counter to warm to room temperature.

Tip: The bird will cook more evenly if it is not cold from the refrigerator.

8. Seal the cavity by sewing up the skin.

Tip: I usually pull the flaps of skin together and use 2-3 toothpicks to stitch them together.

9. Truss the legs with string and pin the wings with tooth picks.

Tip: Take a piece of string and tie it to one end of the leg. Wrap the string around the end of the other leg and draw them together. Tie the ends of the string together to hold the legs in place. For the wings, push a toothpick through the second joint of the wing—between the two small bones— and into the breasts to lock them to the sides of the bird.

10. Lay the bird, breast side up, on a wire rack in a roasting pan and pour half a cup of water into the bottom of the pan.

Tip: Lining the roasting pan with aluminum foil is an ecologically suspect technique, but it makes cleanup easier.

12. Reduce the heat to 350º F and insert a constant read thermometer set to 160º F into the breast near the wing joint.

Tip: Whenever I under-cook a chicken it is where the wing meets the breast where the juices are still not running clear. Roasting a whole chicken is always a delicate balance between some bits being over done and salmonella.

Note: Roasting the chicken to temperature should take about an hour. While the chicken is roasting, mix the glaze and prepare the vegetables.

13. Juice the lemon and mix the honey into it in a small bowl.

Tip: Microwaving the glaze for 10 seconds makes it easy to mix the lemon and honey together, but 15 seconds in the microwave and it will boil over and make a mess.

14. Chop the vegetables into bite sized pieces and keep them in separate piles.

Note: For this dish, I cut the onion pole to pole into half inch half moons. I cut the celery on a diagonal into one inch pieces. The bok choi is basically two vegetables, the thick stem and the leafy tops. Cut the stems into chunks and shred the tops into half inch strips. Keep them separate. I cut the bell pepper into half by one and a half inch bars.

15. When the chicken is almost done, when the thermometer reads about 163º F, brush the bird with the honey lemon glaze and sprinkle the reserved Sichuan pepper over the skin. Continue roasting until done, about five minutes.

16. Transfer the chicken to a serving platter and cover it with aluminum foil to rest.

17. Put the remaining peanut oil in a wok and heat it to shimmering over high heat.

Tip: Stir frying vegetables goes very quickly, but all of your ingredients must be prepared and measured before you start cooking.

18. Stir fry the onions, celery, and broken chilies for two minutes, until the onions are just starting to be translucent.

19. Add the stems of the bok choi and garlic and continue stir frying for two minutes.

Tip: Bok choi stem is a very watery vegetable, you want it to be cooked tender crisp, but not over done. It goes flabby and a bit slimy if over cooked.

20. Add the leaves of the bok choi and the red bell pepper and stir fry one more minute, until the leaves have started to wilt.

21. Add the reserved marinade/sauce—and any pan drippings from the roasting pan and serving platter—and toss to combine.

22. Quickly transfer the stir fried vegetables around the chicken on the platter. Leave most of the sauce liquid in the pan.

23. Add some corn starch to the pan and cook for 40 second to thicken the sauce.

24. Spoon the sauce over the vegetables and present the dish to the table.

25. Serve with steamed rice on the side.