This seems to be my week for trying to improve recipes I have made recently. Last week I made an Asian influenced salad to go with my salmon teriyaki. I am making salmon again and the salad was good enough that I wanted to try and make it better. 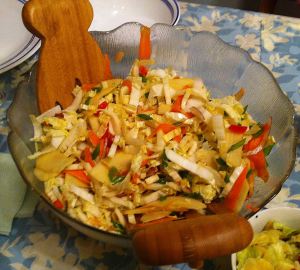 While the last salad was passable, the dressing did not quite have the kick I was looking for. Also, the color was a bit pale and unappealing. I knew that I could do better.

1. Mix the dressing ingredients in a small lidded jar and shake them up. Set them aside for half an hour to meld.

2. Peel, core, and slice the apple into thin slices.

3. Put apple, cabbage, onions, carrots, peppers, and red onion in a large bowl and pour the dressing over it. Toss to coat.

Tip: The dressing should prevent the apples from turning brown, but they should be consumed quickly.