I had decided to have salmon teriyaki for dinner on a week night. Usually I would serve rice and Japanese pickles with this. I decided that I wanted something different, maybe some kind of Asian salad. 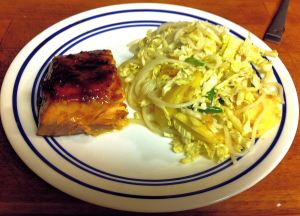 I have some napa cabbage heart, leftover from a previous meal, wilting in my vegetables bin. I have a pile of apples on the counter also starting to show their age. Mixing these with a dressing and perhaps some rice stick to add some starch to the meal would work. This is what I came up with on the spur of the moment.

I like Sunbird Chinese Chicken Salad mix, but for some reason they have stopped making it. I have been trying to make a copycat recipe, without success. This is close, but with a few twists.

Rice vermicelli can come in a wide variety of thicknesses. They can be strait, like spaghetti, or knotted into portion bundles. Some are so thin that you can set them in a bowl of hot water for a few minutes and they are ready to consume. Others are thick enough to require many minutes of boiling. For this salad, I broke the sticks in half, before boiling, so that they would mix into the salad more easily.

1. Mix the dressing ingredients in a small lidded jar and shak them up. Set them aside for half an hour to meld.

2. Boil the vermicelli according to the package instructions and set them in a bowl of cool water.

Tip: One cooked, rice stick can be “put on hold” for up to half an hour by placing them in cool water without damaging their texture.

3. Peel, core, and slice the apple into thin slices.

4. Put apple, cabbage and onions in a large bowl and pour the dressing over it. Toss to coat.

Tip: The dressing should prevent the apples from turning brown, but they should be consumed quickly.