I have done this dish before, but it shows just how differently a dish will turn out when you make just a few changes. The last time I made enough sauce to make the marinade and no more. After the bird was barbequed I sprinkled some fresh Sichuan pepper on the dry surface, producing a bird with crisp skin and strong pepper flavor. This time I made twice as much sauce and basted the bird so that the final dish had a thick, sticky glaze that melded the sauce flavors. Mostly the same ingredients, but very different dining experiences. 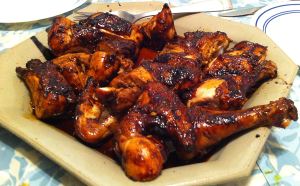 1. Grind the Sichuan pepper into a fine powder.

2. Put all of the marinade ingredients into a bowl and mix well. Set aside to meld.

3. Cut the chicken into quarters.

Note: I personally cut along each side of the back bone with kitchen shears. I remove the breast bone and cut the bird in half. I separate the breasts from the legs. On the breast pieces, I trim off the wing tips, the loose flaps of meat connected to the ribs and the ribs themselves, the long thin bone that runs down the inside of the breast, and the two small bones connected to the wing—technically the corucoid and scapula . I scrape away any large lumps of fat on all four pieces, but I try not to separate the skin from the meat.

4. Put the chicken pieces in a sealable plastic bag and add half of the marinade.

Tip: Put the scraps in a small bag, with the neck and gizzard, and freeze for making soup stock.

5. Squeeze the air out of the bag and shake the marinade around so that it covers the chicken pieces.

7. An hour before you plan to start grilling remove the chicken to a shallow tray on the counter and pat the pieces dry with paper towels.

Tip: You are not trying to wipe off the marinade, you are just removing excess moisture.

Note: The hour exposed to the open air does two things. It warms the meat to room temperature, which give you a more even cooking. It also dries out the surface of the meat so that it sears when it meets the flames, rather than steaming and turning soggy.

8. Build a bi-level grill with one side being hot and the other cooler.

Note: I am using a gas grill so I have one side set to high flame and the other set to low flame.

9. Place the chicken, skin side down on the hot side of the grill. Close the grill.

11. Place the remaining marinade into a small pot and bring the sauce just to a boil.

12. Stir in just enough cornstarch to thicken the basting sauce.

13. Turn the chicken over, still on the hot side, and baste the skin side with sauce. Close the grill.

14. After ten minutes, flip the chicken to skin side down on the cool side of the grill.

15. Baste the chicken again and insert a constant read thermometer set to 152º F into the thickest part of one of the breasts.

16. After 10 minutes flip and baste the chicken.

17. Continues cooking, covered and undisturbed, until the alarm rings.

18. Remove the chicken to a platter and remove the temperature probe.

19. Cover the meat with aluminum foil to rest for ten minutes.

Tip: The covered meat will continue cooking until the internal temperature reaches 160º F, as the heat from the outer parts of the chicken moves into the center.

20. Cut the chicken into serving portions and baste with the remaining sauce.

Note: I tend to use large roasting chickens and I divide the breasts into four pieces and I cut the legs into two or three pieces.

Tip: We found that it is just as good cold in a chicken salad the next day..