My son-in-law is on the Atkins Diet, which means cooking with little or no starch and sugar—except for artificial things—of which I am rather suspicious. He had requested pork loin and I had been thinking “Italian,” until Miriam said she wanted bok choi, as well. Jumping half a world away, I decided on “Chinese.” 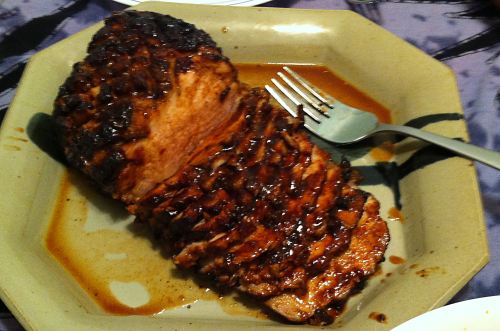 I have tried to make char siu before, but with only limited success—it was more of a problem with the cooking technique, rather than anything to do with the sauce. Char sui really requires a traditional Chinese oven or a specially designed convection oven to cook properly. Even in China this is something people buy at the market, rather than try to cook for themselves.

Traditional char siu has a shiny glaze and is only slightly more tender than jerkey. For this attempt, I am using an uncut pork loin. Cook’s Illustrated has suggested that the secret to cooking this cut of meat is to cook it twice—a sear, followed by a rest, and then baking it slowly. I am adapting their oven technique to the barbecue.

Note: Because of the Atkins issues, I am also eliminating the maltos and honey—so this pork will not have the shiny glaze of a typical char siu.

To go with my pork roast I made green beans and bok choy and for the starch eaters steamed rice.

1. Put all of the marinade ingredients, except the corn starch into a small bowl. Mix well and set aside to meld.

2. Cut half inch crosshatches through the fat cap of the pork loin.

Tip: Try to cut through the fat without cutting too deeply into the meat below.

3. Add half of the marinade to a gallon plastic bag and rub it into the crosshatch cuts.

4. Squeeze the air out of the plastic bag, seal it tightly and put it in the refrigerator.

5. Marinate the pork for at least four hours—overnight is better.

Tip: Turn the plastic bag over occasionally to redistribute the marinade.

6. One hour before you plan to start barbecuing, set the pork on a tray on the counter and pat it dry with paper towels.

Tip: You are not trying to wipe off the marinade, you are just removing excess moisture.

Note: This rest at lets the meat come to room temperature and to allow the surface to dry out so that you get a good sear when the meat hits the heat.

7. Place the remaining marinade into a small pot and stir in just enough cornstarch to thicken the basting sauce.

8. Bring the sauce just to a boil and then remove the pot from the heat.

If using a charcoal grill:

9. Start your coals and when they are ready build a bi-level fire and place an aluminum pan on the front side of the barbecue. Replace the grill and heat it for 5 minutes.

Tip: Push all of the coals to the back of the barbecue. This gives you a hot zone—to sear—and a cooler zone—to roast the meat.

If using a gas grill:

9. Oil the grill and then set the burners on one side to high flame and the other side to low flame. Close the lid and let the grill heat for five minutes.

10. Place the pork loin, fat cap side down on the hot side of the grill.

11. Sear the pork for 2-3 minutes over the hot side of the grill, until well browned.

Tip: Do not close the barbeque lid while you are searing the meat.

12. Rotate the roast a quarter turn and continue searing until all four sides are well browned.

13. Place the seared meat on a tray and wrap it with aluminum foil.

Tip: This rest lets the heat from the outer parts of the roast work its way into the center of the meat.

Note: For a charcoal grill, you may need to add some new coals to your fire. For a gas grill, close the lid and reduce the heat. If your grill has a temperature gauge you want it to read about 375º F, when you return the roast to the barbecue.

15. Baste the pork loin on all sides and insert a constant-read meat thermometer, set to 140º F, into the thickest part of the meat.

16. Put the roast on the cool side of the grill and close the lid.

18. Baste the pork loin on all sides and rotate the roast so that the side that was farthest from the heat is facing it—180º.

19. Continues cooking, covered and undisturbed, until the alarm rings, about another 20-30 minutes.

20. Remove the roast to a platter and baste the roast again with the sauce and wrap the pork in the aluminum foil to rest for 10 minutes.

Tip: The covered meat will continue cooking until the internal temperature reaches 150º F, as the heat from the outer parts of the meat moves into the center and the juices migrate to the outer edges.

21. Slice the pork across the grain into serving portions and baste with the remaining sauce.