When I make shashlik and naan I make a Central Asian salad to go with it. Since I am breaking with the tradition menu for this meal, I do not feel constrained about the ingredients I put in my salad. There is not a lot of the European dill and fennel in Central Asia, but as a Californian I’m going to add it to my salad anyway. 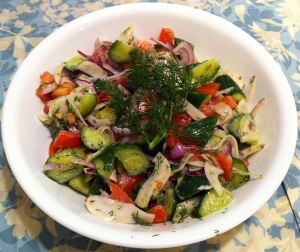 1. Mix the dressing in a small bowl and let stand for a few minutes.

2. Slice the tomatoes and cucumbers into similar sixed pieces and place in a mixing bowl.

Tip: Sometimes I like to roll-cut the cucumbers. Take a diagonal slice from the cucumber and then roll it a quarter turn. Take a second diagonal cut. The cucumber piece will be wedge-shaped on one side and rounded on the other. This is a more interesting shape that simple round or half moon slices. Continue rolling and cutting until done.

3. Add the fennel, onion and dressing to the bowl and mix well.

4. Let the salad stand for 20 minutes to meld, tossing occasionally.

5. Transfer the salad to a serving bowl and garnish with a sprig of dill.

One response to “Karl’s California Fusion Tomato and Cucumber Salad”