Naan (nan, non, n’n, neng) means bread and usually refers to leavened flat bread. There is a wide assortment of breads that go by that name. Some are small (Afgan), some are snowshoe shaped (Indian) and some are not even very flat at all (Tajik). In Xinjiang, the naan are big, round and flat in the middle. This bread was the most available, the safest thing to eat on the street and also the tastiest.   We ate this bread every day while we were traveling through Xinjiang. 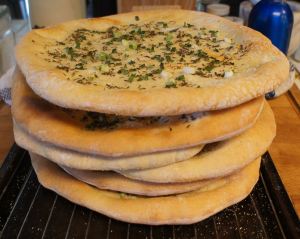 When we got home I knew I had to replicate this dish. But it is not one for the faint of heart. You need: 1) a sprits bottle of water, a baking stone, 2) a peel (I use thin flat steel cookies sheets), 3) a bread stamp of some kind (you can use a fork, but I have lately started to use a 2 inch round pinned block designed for ikebana), 4) a 500° F oven, and 5) the courage the stick your hand into a blazing hot oven.

At first glance the big round flat loaves of Uyghar naan may seem to be all the same. On closer inspection, you will find that they are all different. Each baker literally puts his mark on his bread. Some bakers roll the dough out on a uniquely carved board. As the dough is raised and then baked, the marks remain saying “this is MY bread.”

In Kashgar, the bakers use a 2-4 inch round hand stamp with pegs arraigned in a family pattern. After the bread is rolled flat and round and has started to rise, the baker stamps the middle flat allowing only the edge of the bread rise fully. When baked in a super hot oven, the edge comes out bready, but the middle is more like a cracker.

Each baker then further marks his bread with his personal combination of toppings. Cumin, garlic, green onion, nigella (black cumin), poppy seeds and salt are common elements. Each baker’s bread is different from the next. The thing they have in common is being fresh, hot (if you get there early) and delicious.

After Dinner Note: I was serious about getting them fresh. I made my naan in the morning (lately it has been getting very hot for the Bay Area during the afternoon). In addition to the heat problem, baking naan is a bit of a production number. When you are rolling and stamping and keeping an eye on the loaf in the oven there is no time to make any other dishes. Previously, in making this dish, I would make the salads and prep the meat and then spend the hour just before dinner running around like a mad man in a blazing hot kitchen finishing off the bread before I would rush out to grill the lamb. I had hoped to solve both problems by baking early.  It was not a total success. By the afternoon, the naan had dried out and become very tough and chewy.  A minute in a micro wave with a damp towel might have  softened them up, but we did not think of this until after dinner.

1. Dissolve the yeast in ½ cup of lukewarm water in your bread bowl and add a pinch of sugar.

3. Add 3 cups of bread flour and stir in one direction until the gluten has developed. Some say 100 strokes, this is way too mechanical for me.  I have been making bread since I was ten. The indicator for me is when your stirring spoon starts to create large bubbles that stretch elastically a bit before they pop.

5. Stir in another 1½ cups of flour, until it is mostly absorbs in the dough.

Tip: It is OK for there to be floury lumps at this point.

6. Put about ½ a cup of flour on your bread board and spread it about a bit.

Tip: A bread board is any clean flat, nonporous surface. A wide wooden board would work, but a tiled counter top with grout cracks is a definite no-no. I use a pastry marble.

7. Scrape all of the dough onto the floured board and knead the dough for at least ten minutes. Add more flour as necessary to keep your hands from sticking, but do not use more than is necessary.

Tip: Take the palm of your hand and lay it on the dough ball. Press down and away from you. Pick up the far edge and pull it back over the dough. Rotate the dough 90 degrees and repeat.

8. As you knead the dough all of the dry lumps will be worked out of the dough and eventually it will start to feel elastic.

Tip: Only experience will tell you when the dough is ready, but until then use the ten minute rule.

9. Return the dough to the bowl and cover it with a clean damp towel. Let it rise for 1½ to 2 hours, until it has doubled in size.

10. Punch the dough down and pinch the dough into two. Pinch each half into three equal portions. Roll each into a ball and cover them with a dry towel.

Tip: to pinch dough means to roll it into a cylinder and then using your fingers to squeeze a point in the middle separating it into two halves. A dough ball is a mass of gluten sheets. When you cut dough it is like taking a pair of scissors to cloth and cutting every which way across the weave. When you pinch the dough it is like tearing a piece of cloth along the weave. This keeps most of the gluten sheets intact.

11. Put the baking stone on the lowest rack of your oven and start preheating to 500° F.

12. Working with three balls at a time start to roll and stretch them on a floured board. Take a ball and flatten it into a thick disk about 5 inches around.  Use a rolling pin to flatten it into a thinner disk about 7 inches in diameter. The dough will want to shrink back, because the gluten acts like a rubber band. Let one disk rest while you work with one of the other balls. This will give the gluten time to relax and it will be easier to stretch it further on the next try. Continue rolling and resting the dough until all 6 balls are 12 inch disks. Cover them with a dry towel.

13. Sprinkle a teaspoon of corn meal on a cookie sheet and lay one of the dough rounds on it.

Tip: The corn meal help keep the dough from sticking to the tray when you try to slide it into the hot oven.

14. After the dough has risen for ten minutes, prick the middle of the disk evenly up to 1½ to 2 inch of the edge.

Tip: This is where the bread stamp comes in handy. This is very hard to do with just a fork.

15. Sprits water lightly over the center of the dough.

16. Sprinkle 1/6 of the green onions, black cumin and salt over the dough.

Tip: It is easiest to work with two cookie sheets and have a second loaf rising and ready for the oven as soon as the first is done.

17. Slide the dough off the cookie sheet onto the baking stone.

WARNING: The oven is now at 500°F and that is extremely hot. The slightest brush against any of the metal surfaces, the rack, the edges of the oven, will give you an instant second degree burn. Be extremely cautious when putting the bread into and taking it out of the oven.

18. Bake until the top is well browned.

Tip: Check the naan after three minutes of baking. Use a fork to “pop” any large bubbles that have formed at the edges. If you do not do this the tops of the bubbles will burn before the loaf is finished baking.

19. Use a peel (or flat cookie sheet) to remove the finished loaf and let it cool on a wire rack.

20. Stack the naan and wrap them in a towel until you are ready to use them.