This salad is based loosely on my mother’s potato salad. Although I remember my mother’s salad having celery, it was not on her 3×5 card. I also could not conceive of potato salad without black pepper. 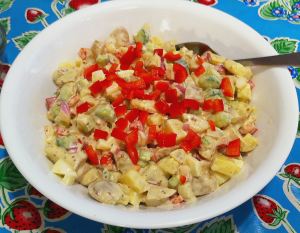 I decided to push the envelope on the original recipe further by adding some mustard to the mix. I usually do not have a can of condensed milk open, so I substituted cream. Finally, instead of simply dumping the chopped eggs into the salad—as my mother did—I broke the yokes into a powdery-paste and mixed them into the dressing.

1. Boil the eggs to a hard boil—about 15 minutes—dunk in cool water and then chill for 15 minutes.

2. Boil the potatoes whole in their skins for 20 to 30 minutes, until a knife slips in easily.

Note: Leaving the skins on and not cutting the potatoes is important. By the time the potatoes are cooked through any exposed potato flesh will become “blown”—the starch will have absorbed enough water to burst the potato cell walls creating a “fluffy” surface on the potato. While there are some recipes that treat this as a virtue—it creates a creamy, semi-mashed, potato salad—it is not what my mother would have made.

3. Let the potatoes cool and chop the potatoes into small pieces—about half in dice—and put them in a large mixing bowl.

Tip: My mother usually peeled the potatoes and cut them into one inch pieces. I decided not to lose the vitamins in the skin.

4. Add the diced onion, celery, red bell pepper, and cucumber to the bowl.

Tip: All the vegetables should be cut into ¼ inch dice.

Note: The cucumber skin can be a bit bitter. You may wish to peel it before adding it to your salad. I wanted some of that bitterness, so I “strip” peeled it.

5. Peel the eggs and cut them in half.

6. Pop the yolks into a small cup and mash them with a fork, until there are no big chunks of solid yolk left.

7. Whisk the mayonnaise, half and half, and mustard together in a small bowl.

8. Whisk in the egg yolk powder into the dressing.

9. Pour the dressing over the salad and add fresh cracked black pepper and salt to taste.

10. Gently fold the ingredients to mix and coat everything with the dressing.

11. Refrigerate to meld for at least one hour before serving.