I am making a Spanish tapas dinner for this Sunday. I got the idea for this tapas from a Martha Stewart recipe and then ignored everything about it. She cooked and peeled the peppers and then stuffed them with a cold shrimp salad. I decided to stuff the peppers with lamb and then roasted them. 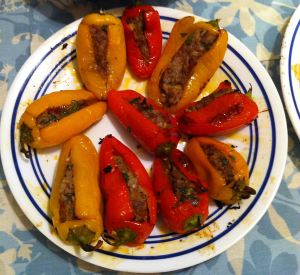 The proper Spanish ingredient for this tapas are Piquillo peppers, a small red sweet pepper. In California these are hard to find—while Fresno chilies look the same, they are spicier than their Spanish cousin. If you want to add a kick to your tapas you may use them, but Sweet Mini bell peppers are closer in heat and make for a colorful addition.

I was planning on making only ten of this tapas, but when I had stuffed all of my peppers I found I still had half of the stuffing left. If I had been feeding a crowd, I could have just kept filling the mini peppers with the lamb. Instead, I chose to turn the remaining meat into another tapas. Tapas, by their nature, lend themselves to infinite variation—use your imagination.

Note: Looking at my photo I realized I was rather slapdash in my presentation on this tapas. I should have placed them cut side down and arraigned them more neatly on the plate.

1. Mix the filling ingredients in a medium bowl and let them meld for 10-15 minutes.

2. Bring a pot of hot water to a boil and parboil the peppers for 3-4 minutes.

Tip: The point here is not to cook the peppers. It is just to make them soft enough that they do not crack when you are stuffing them.

Note: Bell peppers have a thin skin and peeling them seemed to be just too much effort. It would also be difficult to stuff soft, floppy peppers without them breaking apart.

3. Examine your peppers and decide which is the top and the bottom side of each pepper.

Tip: You want a “flat” side down, so that it sits well while you are roasting your peppers.

5. From the middle of the slice, carefully cut down towards the point of the pepper.

Tip: The idea is to cut a “T” in the side of the pepper that you can open up to stuff the pepper.

Note: If you wish you may simply cut off the stem end and stuff the pepper from the top, but I like to use the stem as a neat handle to pick up the pepper when you are eating it.

6. Scrap any seeds out of the peppers.

7. Gently open the flaps of your “T” and stuff each pepper with the lamb mixture.

Tip: Once you have stuffed all of your peppers, you may put this recipe on hold at this point. Set the peppers on a plate and cover them with plastic wrap, refrigerate for up to 4 hours before roasting them.

Note: I stuffed only 10 peppers. I used the rest of the filling to make meatballs as another tapas.

9. Roast the peppers for 12-15 minutes, until cooked through.

Tip: I was doing several tapas that needed to be roasted. However, they did not all have the same baking times. Instead of cooking each one separately, I simply put them all on the same baking tray and removed each tapas as they finished cooking.

10. Arrange the peppers attractively on a plate and serve warm.

Filed under California Fusion, Side Dishes