To go with the red lentil soup I was making for Jan’s friend, Jan asked me to make crackers. Her friend is allergic to dairy, so I could not make my usual butter crackers. I decided to change the spicing of my water crackers to match the soup by adding cumin. 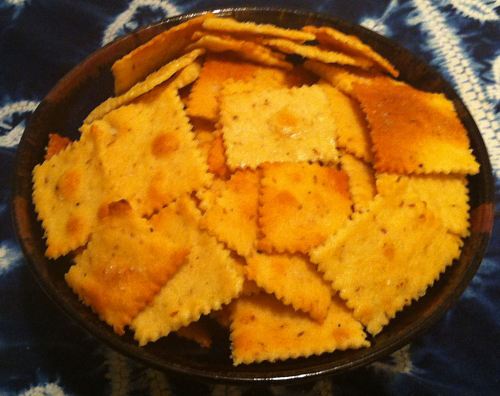 A problem I have had in the past with these crackers was that if they were only slightly under baked, they came out tough and chewy. By baking them a second time They became brittle—as in gum slicing brittle. I wanted a tasty cracker that did not leave holes in my mouth.

1. Toast the cumin seeds in a small dry pan for 1-2 minutes, until fragrant.

2. Lightly crush the seeds with a mortar and pestle. Set aside.

3. Add some ice cubes to a large measuring cup and let it sit for a time to chill the water.

4. Sift the flour, baking powder, and salt together into a large bowl.

5. Whisk in the cumin, sugar, and pepper until thoroughly mixed.

Note: The crushed seeds and orange zest in the sugar does not go through my flour sifter.

6. Measure out one cup of ice water and add the vinegar.

7. Use a spatula to mix the water into the flour, until the dough forms a ball.

Tip: The dough will be fairly soft. Mix until almost all of the flour has just been absorbed.

8. Knead the dough 5 times, until there is no dry flour.

9. Divide the dough in half.

10. Form the dough into two balls and dust them with flour.

Tip: The dry flour keeps the dough from sticking to the plastic wrap.

Tip: This rest gives the flour time to completely hydrate.

Tip: You are trying to completely mix the dough, but not form too much gluten which would make your crackers tough.

Tip: If you have a pizza stone this would be a good time to use it. If not, a cookie sheet will do.

14. On a sheet of parchment paper, roll out the dough as thinly as you can.

Tip: You will need at least 2 tablespoons of flour to keep the dough from sticking to the paper and the rolling pin. Be generous with the flour.

15. Cut the crackers to any size that pleases you.

Tip: A sharp paring knife will do, but a rolling pizza cutter, or a zigzag ravioli cutter is better.

16. Brush the tops of the crackers lightly with olive oil and sprinkle some salt on each cracker.

Tip: This is where the parchment paper really comes in handy, even though the crackers are separated, they can be transferred all together by sliding the paper onto a cookie sheet. If you are using a pizza stone a quick “shove and jerk” will slide the paper onto the stone.

17. While the first set of crackers are baking, repeat steps x-x with the second dough ball.

18. Bake crackers until they are starting to have some golden brown spots, about 15 minutes.

Tip: Rotate the tray about half way through the baking time.

Note: Do not over bake. If the edges start to get dark brown they will taste burnt.

21. Break the crackers apart and scatter them onto a lipped baking tray.

22. Toast the crackers a second time for 10 minutes.

Tip: Baked only once the crackers will be tough and chewy. Baking them a second time makes them crisp.

23. Let the crackers cool a second time and try not to eat them all immediately.

Tip: You may store the few that are left in an air tight plastic bag.