I wanted a vegetable dish for my birthday dinner to go with my Mughal lamb and rice dishes. My family really likes saag paneer, which has become my go-to dish for Indian meals. The only ingredient in modern Indian cuisine that would have been uncommon 500 years ago is tomatoes. 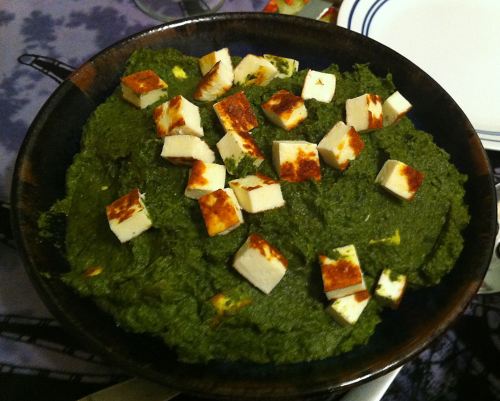 The tomatoes provided a tartness and moisture to this iconic dish. My original recipe did not use any dairy in the saag—the greens of the dish. Looking at other saag recipes, I found some that did include milk products. I decided that yogurt would be a satisfactory substitute for the missing tomatoes.

Surprisingly, chilies spread worldwide very rapidly after the discovery of the New World. The easily transportable seeds would grow in many environments and quickly became a cheap, spicy ingredient in many cuisines. While they would have been a recent addition to Mughal cuisine they would have been available.

Note: From my research on the web, I understand that the difference between a palak and a saag paneer is that if you only use only spinach it is a palak and if you use a mixture of greens, which may include spinach, it is a saag. Also, panneer cheese may not be as readily available in your area. At the end of this recipe are instructions for making your own from scratch.

14 oz. of paneer (See the recipe below, if this cheese is not available in your area)
2 tsp. lemon juice

2. Squeeze as much water out of the greens as possible and set them aside.

3. In a small dry pan, toast the cumin, coriander, and fennel seeds for one minute, until fragrant.

4. Use a spice grinder to break them up into a coarse powder or use a mortar and pestle to crush the seeds.

5. Add the 2 tablespoons of clarified butter to a large pan and sauté the onions with the salt until they are starting to pick up some color, about five minutes.

Tip: The salt helps to release the liquids in the onions, so that they soften and brown more quickly.

6.  Add the garlic and chilies and continue sautéing for three more minutes.

7. Add the ginger, cumin, coriander and fennel powder, to the pan and sauté for two more minutes.

8. Add the boiled greens and continue to sauté for about three minutes.

9. Remove the pan from the heat and let the mixture cool slightly.

10. Stir in the yogurt, turmeric, garam masala, mint and cilantro.

11. Use a blender or food processor puree the mixture into a coarse paste.

Tip: It may be necessary to do this in batches.

12. Return the mixture to the pan.

14. Add the rest of the butter to a griddle and toast the cheese on both sides until lightly brown.

Tip: Paneer is a very dense cheese that does not melt.

15. Cut the cheese slabs into cubes and set aside.

16. Stir most of the paneer cubes, the lemon juice, and salt to taste into the vegetables in the pan.

Tip: Reserve some of the cubes as garnish.

17. Let the mixture cook over a medium heat for a couple of minutes to meld and bring it back up to temperature.

18. Remove the saag to a serving bowl and garnish with the remaining paneer cubes.

From From Bengal to Punjab: The Cuisines of India by Smita Chandra.

1. Bring cream to a boil in a heavy pot.

2. Add the lemon juice and stir until the curds rise to the top and only clear liquid remains.

3. Remove from heat and let stand for 5 minutes.

4. Strain contents of the pot through 3 layers of cheese cloth set in a fine sieve.

5. Tie up the corners of the cheese cloth to form a pouch and hang it from the faucet and gently twist and squeeze to remove the excess liquid.

7. Remove the pouch to a board and form it into a block 4 inches wide and half an inch thick.

8. Fill a large pot with water and set it on the pouch to compress it for 2 hours.

9. Remove the cheese cloth and use.

Note: If you are going to fry the cheese, freeze it for one hour first to prevent it from crumbling.