Karl’s Wild Rice and Arugula Salad with Cranberries and Pecans

Jan is having another potluck with the relocated American Indians project. She asked me to come up with a dish that she could take to work in the morning  that would still be nice after a day without refrigeration. It also needed to be tailored to Native American tastes. 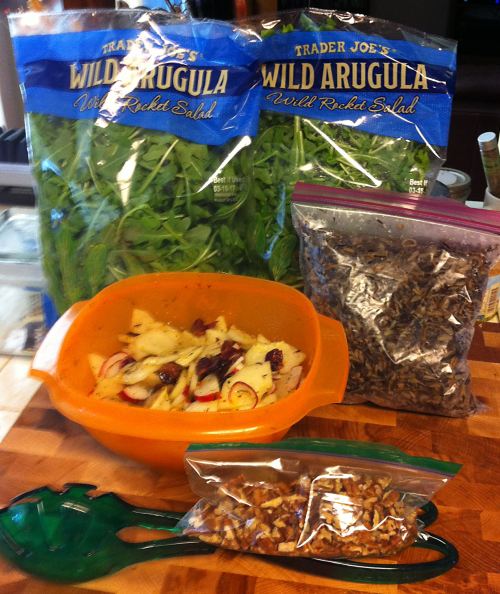 Note: However, almost none of the people involved are from the same tribe, so you cannot just do something like Southwest Indian cuisine and be at all confident that everyone will like it.

My Asian pear-apple and arugula salad has become a standard dish in my household, since I came up with it a few months ago. It is a very versatile salad and I am constantly tinkering with it—adding shrimp or salmon to make it a dinner salad, etc. For this occasion, I thought I would add some Native American ingredients—such as wild rice, cranberries, and pecans.

Wild rice is actually an American grass seed. Unlike white rice, wild rice does not have the outer bran sheath removed and this coating contains a lot of pectin which slows the absorption of water. As a result, wild rice cooks very slowly and tends to look “blown out” when done.

Tip: A trick to cooking the wild rice more evenly and quickly is to add a bit of baking soda to the cooking liquid. The soda breaks down the pectin and allows the water greater access to the endosperm inside the hull.

There was still the problem of the time delay. As soon as you dress the greens they start to wilt and over time the rice would become soggy. If I simply made the salad in the morning it might be very unappealing by the time Jan planned to serve it.

My solution was to keep the parts of the salad separate until serving. I would put the greens in one bag, wild rice in another, pecan bits in a third, and the dressing with the pickled fruit and vegetables in a sealed container. When Jan is ready to serve, she would simply assemble and toss the salad—voilà, “instant” fresh salad.

Note: I had planned to use twice as much arugula—2 bags—but when Jan saw how much food other people had brought she ended up only using one.

After Dinner Note: One of the women commented that her husband had gone back for seconds and “…he never has seconds on salad!” I would count this as a success.

Karl’s Wild Rice and Arugula Salad with Cranberries and Pecans

1. Rinse the rice and put it into a medium pot with four cups of water.

Tip: You cook wild rice more like pasta than regular white rice. The cooking time for different varieties of wild rice differ greatly and you do not want to risk scorching by adding too little water. When the rice is tender, you drain off the excess liquid.

3. Bring the liquid to a boil, reduce the heat to a simmer, and cover the pot.

Tip:  Check the rice after 45 minutes—it may take as much as an hour to reach your desired tenderness.

Note: Do not worry about the steam escaping while you check the rice. There should be enough liquid in the pot that it makes no difference.

4. When the rice is tender, drain it well and set it aside.

5. Mix the marmalade, oil, ½ teaspoon of thyme, the chervil, and a pinch of salt in a medium bowl.

Tip: The dressing will seem very thick at this point. The moisture released by the vegetables will thin the dressing out.

6. Peel, quarter and slice the Asian pear-apples thinly and put them in the bowl.

Tip: If you have a mandoline, slice the vegetables directly into the bowl.

7. Slice the radishes into the bowl.

Tip: If they are very large radishes cut them in half pole to pole.

8. Mix the vegetables and cranberries into the dressing and let the melt for at least half an hour.

Tip: 2-3 hours is better to give the cranberries time to absorb the pear-apple juice.

Note: The salad may be put on hold at this point for at least 6 hours. It is easily transportable and quick to assemble at the last minute.

9. Just before serving toss the arugula and rice with the fruit, vegetable dressing to mix and coat.

10. Garnish with the pecan bits and serve.