I love twice cooked pork, but to make it requires that you have some slow-cooked, Asian-flavored pork to start with—highly spiced Mexican pork will not do.  Many American Chinese restaurants start by boiling pork belly, then slicing it, and frying it to make a very fatty dish. In China, what I was served was usually made with lean pork. Traditional, twice cooked pork is basically a Chinese leftover dish—or as my Chinese students called it “peasant food.” 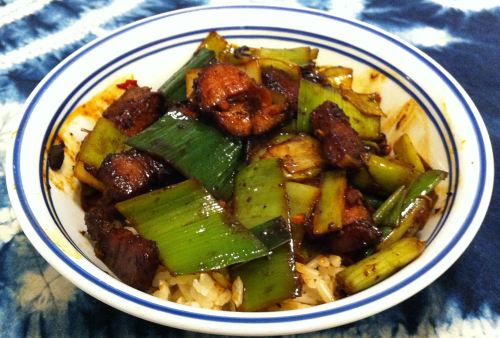 Note: In the times I have returned to China in the last 30 years, they have begun making this dish the American/Chinese way. As China has become more wealthy, many have also gained weight. This is because being able to afford fatty pork is considered a sign of wealth and prestige.

This is one the earlier recipes I posted, based on one by Chichi’s Chinese. My diet has changed since then, because of diabetes. I am tossing out the extra sugar—although the commercial sauces still contain some—and replacing the high glycemic wheat noodles with brown Jasmine rice. I have also simplified it to use jarred black bean sauce, because fermented black beans are not  as widely available.

Note: I live in cosmopolitan Silicon Valley, where everyone has come and brought their food with them. If you search you will find small shops—and for some cultures not so small markets—that will carry many of the products sojourners miss from their home countries. I am sure that, if you live in the Midwest your options are much more limited.

1. Measure the sauce ingredients into a small bowl and set it near to hand while you are cooking.

Tip: Whenever you are making a stir-fry, always have all of your ingredients prepped and ready to hand.  Once you start frying you do not have time to do any chopping

2. Remove any large chunks of fat and slice the pork across the grain into ¼ inch thick bite sized pieces.

Tip: Cut off the green parts and split them length wise. Be sure to rinse off any dirt between the leaves. Stack the leaves and cut them into pieces. Split the white parts lengthwise and cut them. A simple trick with the white parts is to not slice all the way down to the root. This keeps the layers of the leek together and prevents them from sliding around while you are cutting them.

Note:  When growing leeks, the white part is protected from the sun by being buried in a mound of dirt—otherwise it would turn green. In this process, some of the dirt lands in the cracks formed by the leaves and can work its way deep into the leaf sheath.

4. Heat the oil in a skillet, or wok, over medium-high heat until shimmering.

5. Add the slices of pork and stir-fry until the meat is brown and somewhat crisp, about 2-4 minutes.

6. Transfer the pork to a bowl and add the leeks.

7. Stir-fry the leeks until they are just cooked, about 5-7 minutes.

8. Return the meat to the pans and pour the contents of the sauce bowl over the meat and vegetables.

9. Stir-fry briefly to thicken the sauce and then toss the meat and vegetables to coat them with the sauce.