A few weeks ago, I made fresh salmon patties. I did not want to make the same thing, but Jan really liked them except for the fact that that they were not made of crab. Crab is very expensive, so I thought I would stretch it with some shrimp. 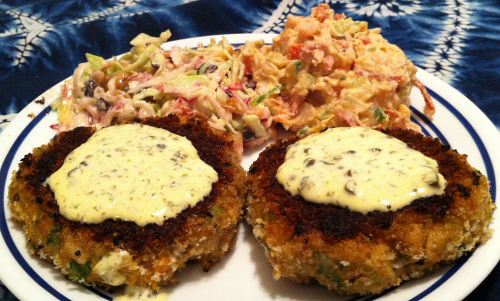 Note: I served my crab and shrimp cakes with coleslaw and Japanese potato salad.

1. Shell and chop the raw shrimp.

Tip: You are going for a “baby bear” chop—fairly finely. The shrimp meat and the liquid ingredients will moisten the  bread crumbs to form a panade that acts as a binding agent to hold the patties together.

Note: You will not be adding the crab meat until the very end of mixing, because you want to keep the lumps of crab as large as possible to give the patties some texture.

2. Put the shrimp meat, mayonnaise, egg, and Worcestershire sauce in a medium bowl and lightly scramble them together.

Tip: Stir the mixture several times to break the bread crumbs into a paste.

4. Heat the remaining one teaspoon of the oil in a small pan and sauté the onions, celery, and bell pepper with the salt over medium high heat until soft, about 4 minutes.

Tip: Fish cooks fairly quickly. If you add the vegetables to the seafood mixture raw the vegetable bits in the center of the patty will be underdone.   Lightly sautéing them first solves this problem. It also adds flavor with the Maillard reaction and removes excess liquid that would make your patties soggy.

5. Stir the sautéed vegetables and the parsley into the mixture.

6. Fold the crab meat into the mixture.

Tip: Be very gentle when folding in the crab meat , you want to keep the crab pieces as large as possible.

7. Cover the bowl with plastic wrap and refrigerate the mixture for 20-30 minutes.

Tip: This rest gives the bread crumbs to fully hydrate and for the mixture to firm up.

8. Put the panko in a small plate.

9. Form the seafood mixture into patties and coat both sides with the bread crumbs.

Tip: You have enough to form six large patties.

Note: If you wish to serve them as an appetizer or as an addition to a salad, you may form the mixture into smaller patties or balls.

10. Heat the remaining oil in a skillet and fry the patties for 3-4 minutes per side, until golden brown.

Note: As well as giving the patties a crisp crust, the bread crumbs are less likely to stick to the pan.

Tip: You may also garnish with a sprig of parsley if you wish.