Jan is on a soft food diet—nothing where she has to bite with her front teeth—and I have spent the last two weeks thinking up interesting foods that she can still eat. She decided that she could handle chili, but tortillas would not work. She likes bread pudding, so we agreed that I could make a soft cornbread pudding to serve on the side. 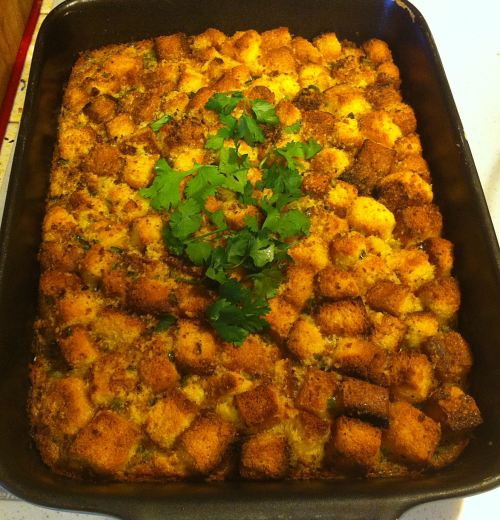 1. Cut the cornbread into ½ inch cubes and spread them in a single layer on a lipped baking sheet.

3. Melt two tablespoons of butter in a small skillet and sauté the peppers until soft, about 3-4 minutes.

Tip: Let them cool slightly before adding them to the egg mixture.

4. Scramble the  eggs in a large mixing bowl.

5. Add the jalapeño, cream, pepper and salt to the eggs and mix them well.

Tip: Use a spatula to scrape all of the seasoned butter into the bowl.

6. Add the toasted bread cubes and toss to coat.

7. Let the cornbread soak for 30 minutes.

Tip: Toss frequently so that the egg mixture is absorbed evenly.

8. Use the remaining butter to grease a 9 x 9 inch casserole.

Note: You want the egg mixture to be at least an inch thick when it is transferred to the casserole. If the mixture is too thin it will dry out while it is baking.

9. Scrape all of the cornbread mixture into the casserole and place it in a preheated 350º F oven.

10. Bake the pudding for 40-50 minutes, until an inserted toothpick comes out clean.

11. Garnish with a few sprigs of cilantro.