I had originally planned on making scalloped Russet potatoes and mashed sweet potatoes for this year’s Thanksgiving meal. My wife said, “It is not Thanksgiving without mashed potatoes! A quick shuffle and I did it the other way. 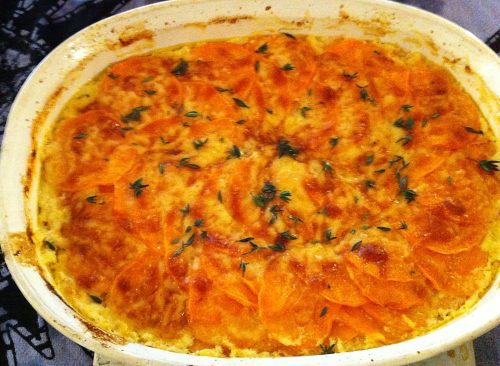 Note: I was making several sides and I tried a shortcut in making the cheese sauce for this dish. Instead of making a cheese sauce to pour over the potatoes, I tried to get it to form during baking. It seamed to work fairly well.

1. Set a quart casserole on a burner, set to low, and melt one tablespoon of butter to grease the dish.

Tip: It is useful to use a casserole with a lid, but covering it with aluminum foil is fine.

Tip: A mandoline is a very useful device to get even slices.

3. Shingle the potato rounds over the bottom of the casserole.

Tip: Overlap the potatoes around the dish.

Note: Depending on how thinly you slice your potatoes, you may have enough to make two or three layers of potatoes. Add another tablespoon of butter, if you have three layers.

5. Lightly sprinkle the potatoes with salt and pepper.

6. Sprinkle half of cheese evenly over potatoes.

Tip: Use only a third of the cheese, if you have three layers.

7. Lay a second layer of potatoes over the first and salt and pepper it lightly.

Tip: If you have enough for three layers of potatoes add a third of the cheese.

Note: Save the remaining cheese to add later.

9. Seal and shake the jar to mix the milk and flour.

10. Pour the milk over the casserole and cover the dish.

Note: I had left the lower rack of my over at the lowest setting, so that I could start baking my sweet potatoes at the same time as the turkey was finishing roasting.

12. Remove the casserole cover and sprinkle the remaining cheese on top.

13. Move the casserole to the middle rack and switch the oven to broil—at 350° F.

14. Broil the casserole for another 20-30 minutes, until the top is spotty brown.

Tip: Insert a knife to check that the sweet potatoes are tender and fully cooked.

15. Garnish with the fresh thyme and serve warm.