I am making a festival meal for one of Jan’s Chinese students. I wanted to make as many dishes as possible to show respect. Last week, I had made kūbide for one of our meals*, but I had some meat mix left over. I decided to serve meatballs an hor d’oeuvre. 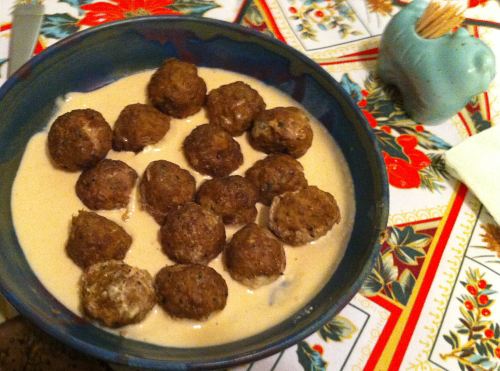 Note: We were hungry and I forgot to take a picture to post with the recipe, so I will have to wait until I make them again. I have posted a similar recipe here.

Kūbide is a Persian mixture of lamb and beef with sumac, either mixed into the meat or sprinkled on after cooking. My family does not like sumac, so I took it out. The recipe below has been reduced from the original to match with the leftover mix I used for this dish.

Note: Advieh is a Middle Eastern/Persian spice blend with a variety of different ingredients depending on the particular cuisine. For this dish, I listed the ingredients I used for this one.

Kūbide meatballs should be served with some king of sauce. Sesame sauce is a standard middle Eastern sauce used with this grilled meat. This is another dish that can be made ahead and reheated just before serving.

1. Grate the onion and garlic into a non-reactive bowl.

2. Add the rest of the kūbide ingredients to the bowl and mix well.

3. Cover the bowl and refrigerate for at least one hour to meld.

4. Three hours before the meal, remove the meat from the refrigerator.

Tip: Set it on the counter and let the mixture come to room temperature for about one hour.

5. Wet your hands and scoop out one tablespoon of the meat mixture.

6. Roll the meat into a ball and place it in a Pam-ed large, lipped baking pan.

Tip: Do not over pack the meatballs, they should not be touching.

7. Set the rack to the middle of the oven and broil the meatballs for 10 minutes, until the surfaces are crusty brown and the meat is just cooked through.

8. Remove the tray from the oven and wipe any scum that has formed around the bases of the meatballs.

9. Drain off any liquid that has collected in the pan and return the meatballs with the crusty side down.

10. Return the pan to the oven and continue broiling for another 5-7 minutes, until the second side has browned.

11. Remove the pan from the oven and tent with foil while you finish making the sauce.

12. Add the tahini and hot water to a small bowl and mix it until it turns into a smooth sauce.

Tip: Over time this sauce will thicken as the ground seeds continue to soak up the liquid. You may need to add more hot water to thin the sauce. It should be thinner, rather than pasty.

14. Pour the sauce into a shallow serving bowl and nestle the meatballs into the sauce.

Tip: Ideally, you want the tops of the meatballs to be brown and crusty, rather than coated in the sauce.

15. Serve the meatballs with toothpicks.

Filed under Beef, Lamb, Sauces and Spices, Side Dishes