My wife, Jan, went to Fresno to visit family and friends just before Christmas. One of her friends orange bombed me with 40 perfectly ripe, 3 inch navel oranges—enough to make almost 20 jars of marmalade. I have already made and given away this year’s Christmas batch. What could I do to use them up without them just sitting on my shelf? 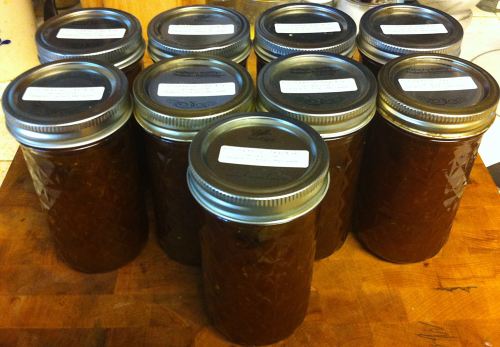 I have been making my Christmas marmalade for over 15 years now. The recipe I posted in 2012 was adapted from a Joy of Cooking recipe that used whole fruit and a fair amount of water and sugar—this produced a very chunky marmalade. Over time, I have reduced the water until I eliminated it all together. I also stopped using the whole peel and started using only the zest.

My first decision was that I would super concentrate this batch of jam. Forty oranges produced about 20 cups of juice and 1½ cups of zest. Since I was planning to boil down the juice, I took only the best of the zest—rather than trying to get as much of the peel as I could, which is what I usually do.

This year, Jan had made some sugared cranberries for our Christmas feast—she had not liked how they had come out and so would not let me post them. A byproduct of this recipe was about a cup of cranberry simple syrup. I used it up in one batches of my Christmas marmalade. This flavor was very popular as we were giving them away. This batch was not very cranberry flavored and I decided to do an experiment using whole berries.

Both the zest and cranberries have a lot of pectin. If I added them to the juice—as I was reducing its volume—my jam would gel before I was ready. I kept the zest separate—wetting it down with a couple of cups of juice—and i saved the cranberries for later.  I then boiled down the 18 cups of juice down to eight cups. With the cranberries and sugar this would produce about nine 12 oz. jars of super concentrated marmalade.

After Note: This batch came out really well. I think I may have discovered a new recipe for next year’s Christmas marmalade.

1. Zest and juice the oranges.

Tip: These are minimalist instructions. If you want more detailed instructions on jam making, please go to my original post on Karl’s Christmas Marmalade, where I have covered this topic step by step.

Note: Many recipes I have read warn against making jam in large batches. I have never had any difficulty in making batches up to 12 cups of juice.

2. Put two cups the fruit juice and zest in a non-reactive pot and set it aside.

3. Put the rest of the orange juice in a large pot and bring it to a simmer, uncovered.

Tip: It is very important to use a thick bottomed and very deep pot. You want the heat to be evenly distributed over the bottom of the pot—no hot spots that could scorch. You also want a lot of room to prevent the pot from boiling over.

Note: The idea here is to evaporate the juice as much as possible without damaging its flavor.

4. As soon as the juice mixture comes to a full boil, remove it from the heat and cover the pot.

5. Simmer the juice until it has reduced its volume by a half.

Tip: This took me about six hours of cooking.

6. Add the fruit juice and zest mixture to the pot and bring it just to a boil.

Tip: This heating and rest allows the bitter compounds in the rinds to break down into the complex flavor compounds that you associate with “real” orange and lemon flavors. This resting period is one of the secrets to my jam’s intense, but smooth taste. Twelve hours is a minimum, but this time I let the mix meld for two days, with a second heating after 24 hours.

Note: Before you start cooking the marmalade you should sterilize your jars and lids. Estimate how many jars you think you will need—add a jar or two just in case—and boil them for 10-15 minutes. Transfer them to a clean kitchen towel and set them open end down.

8. Return the pot to the stove and bring it to a gentle boil.

Tip: You will have had some more lost of the volume due to evaporation from the heating and resting of the mixture. It is a good idea to re-measure the juice mixture to know how much sugar to add.

9. Add one cup of rinsed cranberries to the pot.

Note: My cranberries had been sitting in my refrigerator for two weeks. By the time I got around to making this jam fresh cranberries were not longer available in stores. Some of the berries has gone soft, so I hand sorted and tossed any that were not perfect.

10. Add the sugar and stir until dissolved.

Note: I had originally intended to use my usual ratio of ¾ cup sugar to 1 cup of juice, but the cranberries made the mix too tart. I finally settled on a 1:1 ratio.

11. Cook the jam at a gentle boil until it starts to jell.

Tip: This can take anywhere from 45 minutes to an hour and fifteen minutes. How long it takes depends a lot on how close to a full boil you are cooking the mix. A low boil takes a bit longer, but a high boil must be constantly watched and stirred to prevent boil-over and scorching.

12. Pour the marmalade into the sterilized jars.

Tip: A very useful tool for putting the scalding hot jam into the jars is a wide mouthed funnel.

Note: Most of the cranberries will be floating on top of the jam. To make sure that each jar had its fair share, I started by adding a scoop off the top into each jar.

13. Put on and seal the lids, not quite tight

14. Put the jars in a hot water bath and boil them for ten minutes.

15. Remove the jars from the water bath and seal the lids tightly.