I am making Easter dinner and I decided to make latkes to go with my ham and salmon main dishes. I have more people attending this meal, so I have increased some of the ingredients from the last time I made these popular pancakes. I have also decided to add a touch of mustard seeds. 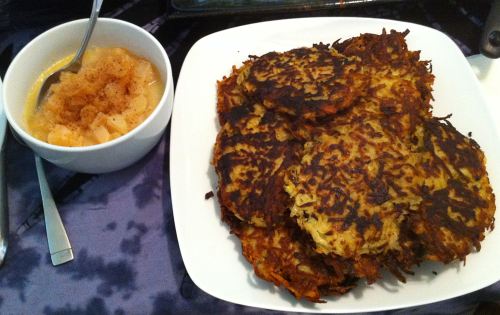 Note: I made a fresh pear sauce, rather than the more usual apple sauce, to go with my latkes.

1. Peel and shred the potatoes.

Tip: I use the large holes of a 1 box grater.

2. Sprinkle the potatoes strings with the salt and toss to distribute.

4. Take handfuls of the potatoes and squeeze them to remove as much liquid as you can.

Tip: This process leaves you with several oval-shaped pills of potatoes.

5. Let the potato pills sit for 5 more minutes and squeeze them a second time.

Note: The idea here is to remove as much of the potatoes’ liquid as possible. The moisture that leaks out of the potatoes will cause the potato pancakes to steam and will slow down their browning.

6. Pull the potato pills apart and put them in a bowl.

7. Grate onion with the box grater.

Tip: Keep the onion juices that are produced by this process. This flavorful liquid will be soaked up by the bread crumbs.

8. Mix in the grated onion, tarragon, pepper, and eggs.

9. Mix in the panko and let the mixture rest for 10 minutes.

Tip: This is to give the bread time to absorb the moisture.

Tip: This is a place to keep the latkes warm and to finish cooking them.

Note: If your latkes are too thick—or you are not using enough oil—your pancakes may still be slightly raw in the center when the outsides are crispy and browned. Baking them after frying them solvers this problem.

11. Give the potato mix a final stir to distribute any pooled liquids.

12. Heat 1-3 tablespoons of oil in a large nonstick skillet over medium-high heat.

Note: Wife Jan’s dietary restrictions means that I really cannot deep fry things. As a result, I use only a thin film of oil when cooking. This is not ideal for frying potato pancakes.

13. When the oil is shimmering, distribute three or four ¼ cup scoops of the potatoe mix around the pan.

Tip: Use the back of a spatula to flatten the mounds into ¼ – ⅜ inch thick pancakes.

14. Fry the latkes until they are crispy and golden, 2 to 3 minutes per side.

15. Transfer the finished latkes to the baking sheet in the oven.

Note: Give the final batch of latkes at least 10 minutes in the oven to finish cooking. If you are hungry you may take the first ones out and serve them while the last batch finishes baking.

16. Adding more oil as needed, continue frying the latke, until you run out of the potato mixture.

Tip: Over time the pan will continue to heat up and you may need to reduce the heat after the first batch to prevent the later batches from burning.

17. Serve with pear sauce and/or crème fraiche on the side.

Note: Or you can go more traditional and use apple sauce and sour cream.