Daughter Miriam is on a very restricted diet—no onions, garlic, or peppers (not even bell peppers). This has made creating my Sunday feasts a bit of a challenge. After a bit of negotiation, we settled on Chinese steamed chicken and pea sprouts for this week.

My usual recipe for this dish would be dong quai chicken, but son-in-law Chris seriously does not like this dish. Dong quai chicken is a dish that is specifically designed for women’s health and it really does smell bad to men. To please everyone, I decided to use Chinese five spice instead.

Note: To women—especially those who need its benefits—dong quai chicken smells heavenly. We once had a dinner party where I served it and one of the guests was gravely “rundown.” She pulled the serving dish to her and slapped away anyone who tried to take a bite—fortunately, I had served a lot of other dishes at that meal.

In the past, I have steamed the chicken whole in a deep round casserole set in a large stock pot. I did this to trap the flavorful juices released by the chicken. The problem occurred in trying to remove the hot and heavy casserole from the pot, without getting burned or losing too much of the broth.

Note: Since I ended up steaming the chicken in two halves, I decided that I would some add green onion to one of the dishes—for those who could still enjoy them.

1. At least four hours before cooking, cut the chicken in half.

Tip: Pull the skin free of the breast and thighs, so that the marinade can get to the flesh underneath. You will be pulling the skin over the meat as you steam it. Of course, if you wish your may remove the skin entirely—it does get a bit flabby and unappealing after it has been steamed.

Note: In cutting my chicken in half, I use kitchen shears to cut along both sides of the spine—to remove it entirely. I remove the breast bone and the wing tips. I also remove the sharp little rib bones, because they prick holes in the plastic bag as the bird marinates. You may also wish to remove the pelvic bones at the top of the legs—this makes it easier to get to the meat.

2. Mix the marinade ingredients in a small bowl.

3. Put the chicken halves and marinade in a sealable gallon bag.

4. Marinate the chicken for at least 4 hours in the refrigerator.

5. Lay each half of the chicken in a wide shallow bowl and spoon any remaining marinade over the bird. 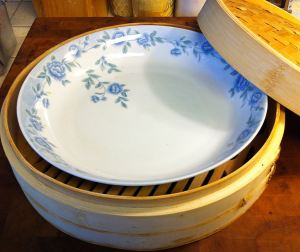 Tip: Use a instant read thermometer to check the internal temperature. If the chicken is still below 165º F continue steaming for another 5-10 minutes.

8. Garnish the dishes with the pea sprouts—and onions if you are using them—during the last 5-10 minutes of steaming.

Note: I had put them in at the beginning and they ended up a bit overcooked.

9. Place the steamed dishes on trivets.

Tip: You may let your diners just pick at the chicken, but it is easier to slice it up a bit—I do this after they get a chance to see the dish unblemished.

Note: I serve this dish with rice. My diners place the chicken over some rice in their bowls and then spoon some of the broth over it.