A classic of modern Japanese cuisine is Japanese curry. I decided to deconstruct this dish into barbecued wings, but this left me with all of the other ingredients of the dish—potatoes and carrots, apples, etc. I decided that turning them into a potato salad would be a good side dish for my barbecue.

While onions are also a part of Japanese curry, daughter Miriam is still off onions. I am adapting the onion-less version I made last time. I decided that to replace the flavor kick of the onions, I would pickle the vegetables in my salad. Instead of a simple vegetal crunch, you would get a sweet and sour burst of crunchy goodness. Adding diced apple would also introduce a sweet surprise in some bites.

A few weeks ago, I did an Indian potato dish where the potatoes were boiled with spices. This seemed like another way to add flavor to my dish. Since I am doing curry, Indian spices were the way to go.

1. Mix the pickling sauce in a small bowl.

Note: Stir until the sugar and Hon Dashi are completely dissolved.

2. Cut the carrots, celery, and daikon into small pieces.

Tip: What shapes and sizes you cut your vegetables in is a personal preference. Many European trained cooks would cut them into identically sized cubes. The Japanese never miss an opportunity to be creative. I roll cut the carrot into thin half inch pieces. I cut the celery lengthwise and then cut it into bars—using a steep diagonal slice. I had a fairly thin piece of daikon, so I quartered it length wise and sliced the pieces thinly.

Note: When I was finished all my vegetables were close to the same size, but each was distinct.

3. Add the vegetables to the bowl of sauce and pickle them for at least four hours.

4. While the vegetables are pickling prepare your potatoes.

5. Peel and cut your potatoes into medium chunks.

Tip: Normally, I boil my potatoes in large pieces, up to 3 inches—to prevent the starch on the surfaces of the potatoes from absorbing too much water. Since the point of this technique is for the potatoes to absorb some of flavors—and color—of the spices, I decided to cut the potatoes into ¾ inch slices.

6. Put the boiling spices into a medium pot half full of water and bring it to a boil.

Note: There should be enough water in the pot to cover the potatoes by one inch. If necessary add more water.

7. Add the potatoes and return the pot to a boil.

8. Simmer the potatoes for 10 minutes and then remove the pot from the heat.

Tip: This is an energy saving tip. The residual heat of the water will finish cooking the potatoes.

Note: The potatoes are done when you can slide a knife easily into the thickest piece of potato.

Tip: I saved some of the pickling sauce to use in the dressing.

Note: In a waste-not-want-not mood, I used the rest of the “used” pickling sauce to make some lightly pickled cucumbers as a second side dish. 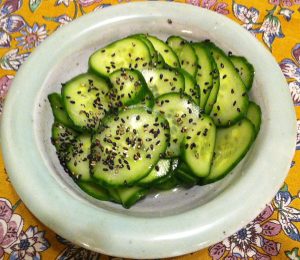 11. Put the dressing ingredients into a small bowl and mix them together.

Tip: I substituted the rice vinegar in the recipe with some of the pickling sauce.

Note: Do not add as much mayonnaise as you think you may need. If your salad still seems a bit dry after you have added the dressing you may always add more mayonnaise in order reach your desired consistency.

12. Peel and dice the apple(s) just before you add them to the salad.

Tip: Apples oxidize and turn brown very quickly after they are cut. You want them in the salad and coated with the dressing before this starts to happen.

13. Drain the potatoes, let them cool slightly, and pick out the spice bits.

14. Use a large whisk to partly mash the potatoes.

Tip: You want about a 50/50 ratio of mash to medium/small potato chunks.

15. Add the vegetables and apple to the potatoes and pour the dressing over the salad.

16. Fold the dressing, potatoes, and vegetables until well blended.

Tip: You may be fairly rough with this mixing, because you want a fairly creamy consistency.

Note: However, do not overwork the potatoes, as they may turn “gluey.”

17.Transfer the salad to a serving bowl and let it meld, covered with plastic wrap, in the refrigerator for at least 20 minutes.

Tip: You do not want the salad to be icy, but it is better if it is slightly cooler than room temperature.

18. Just before serving garnish the salad with black sesame seeds.

Note: You may also garnish the salad with finely sliced green onion tops, or my younger daughter’s favorite, a serious sprinkle of shichimi tōgarashi.

Filed under Salads, Side Dishes